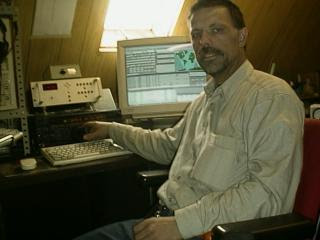 I was confused when I heard an "unusual" station calling CQ on 20 meters this afternoon. The band seemed to be in "pretty good shape" and there was a "herd" of West Coast stations working SSB DX into Eastern Europe. There were many California, Washington, and Oregon stations having a "feast" as OS8A passed out "dozens" of contacts.

They were ALL very strong into West Virginia and I also heard Scotland and Lithuania in the distance and I even tried to make a SSB contact myself, although the Belgian station was concentrating on 6-7 and 0 calls.

There was way too much competition for me today, so I decided to tune to the CW portion of the band and send a few CQ's myself. (OR0A was actually pointed "over the pole" so my chances of a contact on the "east coast" were NOT very good).

At 1628z I was "shocked" when I heard ON4AOI sending CQ CQ CQ de ON4AOI LOTW USERS on 14.063 MHz. and it took me several minutes to make sense out of it. I know what "Log of the World" is...but never heard anyone sending it as a extra to their call sign. I was totally baffled (despite the fact he was clearly sending LOTW users)

This was NOT a "pile up", (where dozens of operators were trying to "bust" the pack) he was out there "in the clear" without a single response from anyone. After several minutes without a single response.... I couldn't stand it anymore (despite the fact I'm not set up for LOTW). I gave him a call with the vague hope he would respond.
I "fine tuned" once more and heard him send QRZ YA PSE AGN ? We exchanged RST's and he sent a TU. He sent something else but I didn't catch it due to QSB and NO other comments, but MY RST was a 569 and I sent him a 559 wid QSB. I assume he then moved to another frequency to try his luck once more. I never heard him again.
I sent him an e-mail to explain my confusion with the "LOTW" extra . I'm hoping I'll get a confirmation back so will be checking the e-mail closely the next few days. If he's using E-QSL or FISTS, I'll send a confirmation. The LOTW program is a great tool but I just haven't looked into it.
I didn't know his QTH was "Belgium" until I ran it on the data base!
Posted by Jspiker at 10:15 AM