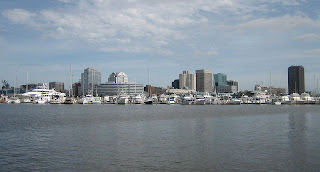 The last few years I've talked to Dan (N4FI) several times. But when he sent his QTH of Norfolk Virginia this morning it had a different meaning to me. Last Thursday there was a terrific storm that blew up the east coast and I heard and watched the TV as the area from Nags Head in North Carolina and up to Virginia Beach took a terrific pounding from the wind and the ocean. They had winds of over 60 mph and I saw pictures on the news where reporters had a difficult time even standing still upright as the wind blew the rain sideways across the coastal areas during the evening news report.

Dan (N4FI) was running 5 watts QRP at the beginning of the QSO and using a battery for his radio this morning. He has been sitting in the dark for the last three days because of trees blown down on his power lines in the neighborhood. There is NO electricity in the area where he lives and I'm not sure how long it will take before it's restored. I think the trees also damaged his car but he didn't mention damage to his home.

I couldn't help but think of just how important a good "radio operator" was in his circumstances there near the beach with no electricity. There's no power for the lights, to pump the gasoline for vehicles, to keep the refrigerator operating and the food from spoiling, all the things we take so much for granted and aren't functioning there now.

I may not have been much physical help this morning but at least I lent a good ear and exchanged some pleasantries about living there in the late 60's while serving in the Navy. I also lived in Newport News for several years back in the mid 70's. I remember how flat it is near the ocean and I know how much the weather can affect the entire tidal basin when a big storm like this runs up the coastline.

I wished him a rapid recovery and hoped he and his family would soon return to normal daily life. It's comforting to think that his hobby could become such a valuable tool in these situations.

Radio is truly the link to the world in these times.
Posted by Jspiker at 6:07 PM

I've noticed that in the past dozen years or so the mid-Atlantic states are suffering, more and more, from damaging weather. I hope those folks can recover soon.