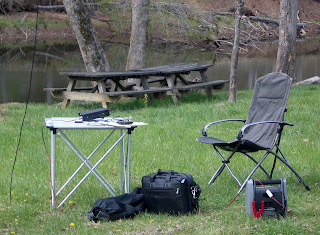 North Bend State Park is near a little town called Cairo in West Virginia. It's on the Hughes River and the site of a new lake. The dam was created just a few years ago.
We traveled here this weekend to spend time with a hiking group we've been members of for many years. (Marilyn and I actually met while hiking with this group). I took the QRP station and my 30 meter antenna with the hopes of spending a few hours on the air.
I set it up near "base" of the dam (elevation about 900 ft) along a stream and was fortunate to arrange the antenna as a "sloper" that was slightly oriented towards the west. Here's a picture of the lake seen from a trail as we hiked above it. 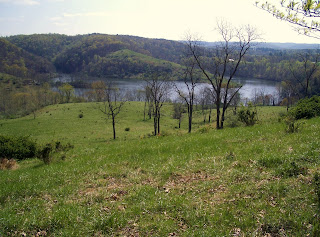 This is the second time I've been able to experiment with my new 30 meter antenna and I like this band more every time I use it. I desperately attempted to work AE5KA in Spain because he was the "strongest" station I heard on the band. He was calling DX and working a slew of stations using a split. I must have spent 15 minutes trying to get his attention and transmitting on the frequency I was hearing others working him.
I had a nice QSO with KD5RSS in Haskell, Oklahoma, at about 800 miles, with a decent report. It was raining there and he was using a G5RV antenna. Butch was concerned that I might find myself in a rain when I explained my station sitting next to the base of the dam.
I like this band and have found some unusual characteristics while operating here in the field. I hear a lot of weak signals and I hear a LOT of them. I hear some REALLY good DX stations that I know are only running 200 watts. Before I took down the antenna and broke down the station I was able to hear VK6AU in Western Australia. He wasn't very loud but he was readable. I emailed him about hearing him and got a nice e-mail back this afternoon.
He was a little over 10,000 miles from me and was the first Australian station I've heard on the bands.
I'll be setting up and operating on this band a lot more now. I brought along a compass to help me orient the antenna this time, and will try to arrange it as an inverted Vee this next time. I copied this sign near an old "railroad tunnel" as we hiking along a "rail trail" near the edge of the park. I rode my bike through 6 of these old tunnels the last time I was here. I hope to spend more time at this park this summer and will bring along the radio to operate more on 30 meters.
The "North Bend Rail Trail" is about 80 miles in West Virginia and is incorporated into the "American Discovery Trail". The American Discovery trail is a "coast to coast"
trail of about 3,000 miles.