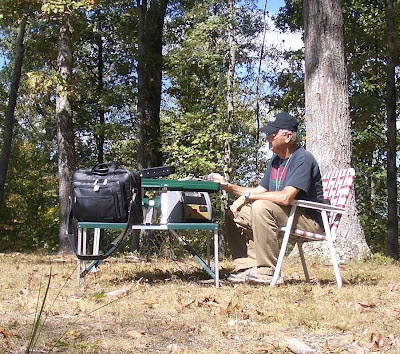 I spent this afternoon "out in the field" with my portable station. The solar flux was 90, the A index was 1, and the K index was 0....all the indicators for a good radio day, especially in the field, away from the electrical noise in town.
But I never dreamed it would be THAT good of a day!
I set up at a city park just outside of town, on the highest point, with some nice trees for an antenna support. As always, I set up for 30 meters with a dipole. Everything went perfect today. It was a "first shot" with the slingshot, and I had the antenna in the air in just a few minutes.
It took only a few more minutes to arrange my table and battery and I was on the air.
But not much on 30 meters....I heard a clear 3 watt beacon (W0ERE) and a station in Florida but not much else.
So I switched over to 20 meters and found it ALIVE with DX stations.
It took a few extra minutes to drop the 30 meter dipole and exchange it with my end fed Zepp. (some people call this antenna an end fed dipole), I re-tuned and immediately heard KN6ZA in Paradise California. Sounded just like he was beside me.
Right after this QSO, I heard WI5C in Arlington Texas. Fantastic signal and we chatted for a bit and then closed because I wanted to listen for some distant stations.
A few minutes later I heard IK6BGT in Italy with an even stronger signal. Justin was on the far side of the "boot" and coming in just like a local. He congratulated me on my QRP status.
A few minutes later, LY3X in Lithuania kicked my socks off...I was beginning to feel really proud of my portable station sitting on a hill in good old West Virginia.
Just when I thought I couldn't get much better, I worked UW5ZM in the Ukraine. Wow....what a day.
About that time, my cell phone rang. It was my brother coming home from work. He could hear the dots and dashes in the background, I said "Is this anything important" -- He said "No"--just wanted to say hello and sounds like you're on the radio---I said yes...having a blast up here in the park---I said-- "I got'a go, I'll call you right back". Then I listened in amazement as I heard a familiar K6AA calling from San Pedro California.
If you look back a few entries on my blog, you'll notice that call sign, as the one I worked a few weeks ago, while aboard the LST 325 (WW2LST) when I visited it, in Marietta Ohio. My Dad was with me and I was fortunate enough to use the ships radio for this contact.
Today....we must have talked for 15 minutes about this eerie "second meeting" on the band. It was spooky.....The club station was again on the air, we happened to be on the same frequency, at the same time. We re-hashed me walking the past club station a few years ago when my wife and I were walking to Huntington beach via an old railroad trail.
To make it more eerie, when I returned this afternoon, from my field operations, their QSL card was on the table.
Radio doesn't get any better than it was for me today. Maybe the dog bite, and the way it turned out had something to do with it?
Good Karma I suppose. 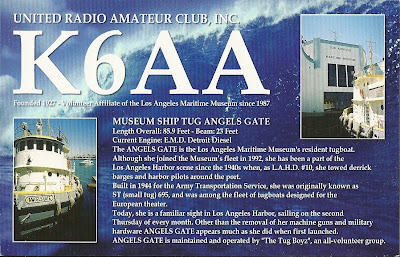 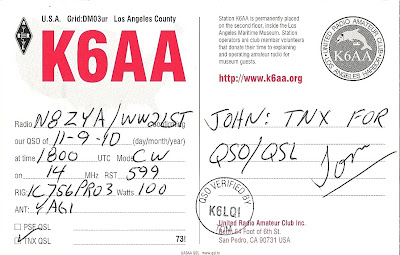 I replied.."the pleasure was all mine"

Hope to hear you again;)

John- Great Post. Ham radio at it's best pretty much. Thanks for sharing.
-Mike kd8jhj

This is what it's all about, isn't it? I've been on the road for the past week and I'm afraid that by the time I get home I'll discover the index to be back in the 70's! I sure hope not.

Great write up of a day of fun and DXing QRP style!

For me, it doesn't get any better than this. The first thing I did when setting up the station was to take a compass bearing to orient the antenna. (That's my compass hanging around my neck in the photo). I was overjoyed when it looked like a promising shot "east and west". My antenna was about 30 ft today.

I still have the hairs on the back of my neck standing upright when thinking about the club station in California.

That was a real hoot.