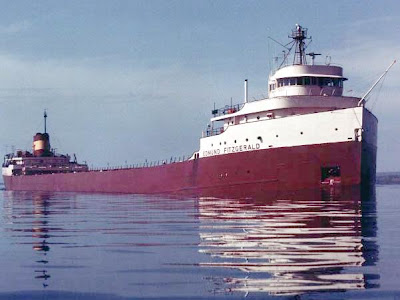 The 20 meter band was absolutely dismal this afternoon but I managed to work this Special Event Station on the Great Lakes. (N8F) was actually W8VS working SSB from the Great Lakes Ship Museum. I've always liked worked "Special Event Stations", and especially ships, (obviously not this one) so I dusted off the microphone.
The wreck of the Edmund Fitzgerald was a modern day tragedy when it sank in a winter storm on Nov 10th, 1975 with the loss of all shipmates. It went down quickly. The cause is still unknown but theories suggest hitting a reef, being pounded by a "rogue wave", or faulty hatch covers. The wreckage was found in about 530 ft of water. It's sitting on the bottom of the lake in two large pieces. The ships bell was recovered on July 4th, 1995.
I've been watching the DX clusters this afternoon and see lot's of activity on 15 and 10 meters. The weather is supposed to be fair tomorrow. I plan to drive out of the valley and set up my G5RV antenna. I should be on the air around 18:00 GMT.
The only other station I worked today was AK9A near Madison Wisconsin. He was QRP but only a short distance in 20 meter terms. Hopefully tomorrow, on either 15 or 10 meters, I'll be able to jump across the pond.
Posted by Jspiker at 2:55 PM

Nice catch John. That is a great picture of the ship. I've not seen that one before. Amazing how placid and calm the water the looks.
73 Mike W8MDE

Wikipedia is a great web site!

He John. Nice SE station contact. A number of years ago I took an interest in purchasing old 8MM home movies. One of those was a 200-foot reel of regular 8MM. In that reel was about 3 minutes of the Fitzgerald passing though an unidentified lock. Ship clearly identified with name on the hull.

You can find Gordon Lightfoot's version of "The wreck of the Edmond Fitzgerald" on u-tube.

Yes...Gordon Lightfoot did a great job with this song. I was out in the field today with the rig and heard this special event station again.