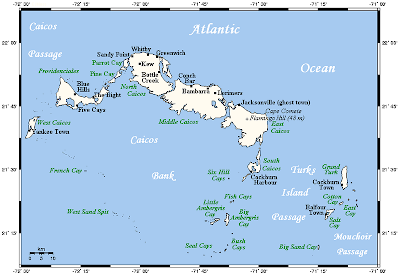 It's nice to be back home again and on the radio once more. To make matters even better, I was finally able to work VP5/KOUU in the Turk and Caicos Islands. I had been hearing him before I left, on the trip to North Carolina, but as usual, there were too many stations trying to work him at the time. Fortunately, I caught him on the 30 meter band this evening.

This island is also another new DX entity for me. (#69)

A few years ago, a friend of mine who was into AM radio broadcasting and built himself a "loop" for nulling out adjacent stations on the same frequency, found "Caribbean Christian Radio" (AM 1020) hiding behind KDKA in Pennsylvania. In the early evenings, when conditions were right, I could hear them on my car radio and also on my GE Super Radio.

In addition to the large AM broadcaster in these islands; there's also an interesting connection to our Space program here. 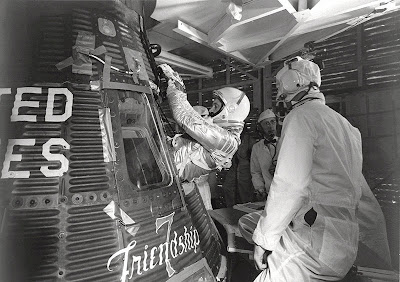 John Glenn made the first US venture into space on February 20th, 1962 and landed in the waters near the Turk and Caicos Islands which was exactly 51 years ago today. That flight is interesting reading on Wikipedia and worth a few minutes of your time. There were quite a few problems on this first orbital flight, one of which were loose and defective bolts holding the entry latch on the capsule. Needless to say, duct tape is good for just about anything. I hope they removed it before blasting off. (see detail on picture)

Good morning John, good to hear that you madei t back home again. It's always a nice feeling to work a new DXCC. I have not heard to much new up this way in the way of new DXCC's me. BUT today is another day in the world of radio!!
Mike

As you say; that's what makes it interesting. I'm glad to be back on the air again.

I've found radio to be a lot like fishing. You never know what you're going to catch until you throw the line in the water.