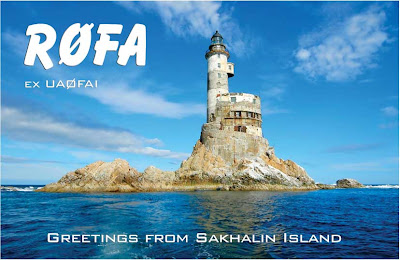 Although not spotted on a cluster at the time, I heard this station on 17 meters around 5:30 PM local time, Not a soul was answering his attempt to work North American stations. Not spotted, not noticed, on 18.075, sending with excellent spacing, doing everything correctly, but not getting any response whatsoever. What a bummer on his part!

I felt that I must make the attempt to work this station, and remarkably, I was able to do so. I had assumed this was a European Russian station but I soon discovered he had an Asiatic designation on the DX entity list. I've worked Asiatic Russian stations before but never with a "R0" prefix. Perhaps that's why it literally "jumped out" at me when I heard it?

When I looked him up on  QRZCQ,  it became "crystal clear" that he was on the Northern part of a large Island just above Japan, and on the far side of China.

There's been a territorial dispute between Japan and Russia on this Island for many years. It's currently resolved that the upper Northern portion of the Island is Russian; and the Southern portion of the Island is Japanese. In September of 1983, due to pilot error, Korean Airliner Flight Number 007 strayed into Russian air space, and was shot down over this Island, with the loss of 269 innocent lives. 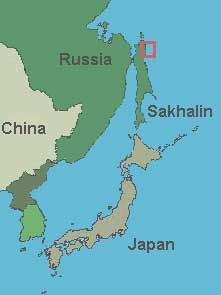 Gena (R0FA) answered my call after several attempts. I wasn't sure that he had it correct but I gave him the benefit of the doubt and entered the data on the DX cluster.

Here is where the story gets interesting.

In the electronic world of today, the appearance of an unusual "response" on a DX Cluster can generate a lot of attention. I had just entered his call, frequency and time along with my customary "QRP @ 3W and Indoor Random Wire" in the comments section of the entry when I immediately heard my call sign being sent, by him, with a familiar IMI (question mark) afterwards. It only took seconds....

I'm assuming he had the original contact correct and when he saw my QRP designation on his computer screen, that it "startled him". It sure did me when I heard him calling me "personally" and putting me in the spotlight. To my knowledge, he worked only one more station in New Jersey on the east coast.

It's difficult to express in words how I felt when I heard myself being called from this Russian / Japanese Island. I can't find the "R0" designation in my "DX" list but I'm assuming this one is a "new country for me."

He was specific about sending QRP and my 449 report on his second response. I was on the proverbial cloud nine. This contact was similar to my previous contact with Japan several weeks ago. I noticed a contact with a California station, just after me, and assume I was getting the "second bounce" onto the east coast.

I sure felt good about working this station with three watts and an indoor random wire. I think he felt the same way by being able to hear and respond to me. At almost 6,000 miles, he was a good catch!

I'm overjoyed with this one. Sometimes I'm just in the right place at the right time!

Glad you enjoyed it!

BTW/ The 73 android app you mentioned several posts ago is a great one for my tablet. I use it all the time.

A really great catch there, John. guess your "dome" has been re-gilded, hi. By the way glad to note you are ok. Was a long blog absence. I always read but don't always comment.
73 Dick

Hi John, a good catch indeed. Some CQ's look like a cry in the desert. yesterday I had something like that. A 7X2RD calling CQ without any takers, so I tried with ssb to call him with 5 W, and yes, he got me. Yip. 73 Paul

Good morning John nice to read your blog entry again. Very nice contact as Larry said....congrats! It's a funny thing about ham radio these things can just come out of the blue.
Mike

Hi John, amazing contact with 3W QRP and indoor antenna. Even someone that's using WSPR with 3W would be very happy. But this is certainly a one of a kind contact. This is what QRP is about! I can feel the joy from reading your blogpost. 73, Bas

The "lightening strike" was "point blank" and yes, my work order for new gold guiding was apparently approved by the powers that be....

It's good to know the "force" is back to normal. Hihi

Love the "cry in the desert" phrase! Yes...it's very true.

Congratulations on the 7X2RD contact. Good to hear from you too.

Yes....appear and disappear in a matter of 15 minutes or so. I've been on the bike a lot since the back problems eased up. This cool weather is awesome!

Got an e-mail this morning from him and looking forward to the QSL card (sent direct). It was as I had thought, a good contact both times but startled at the "QRP 3W" in the remarks section of the DX spot!

I feel really good about this one!