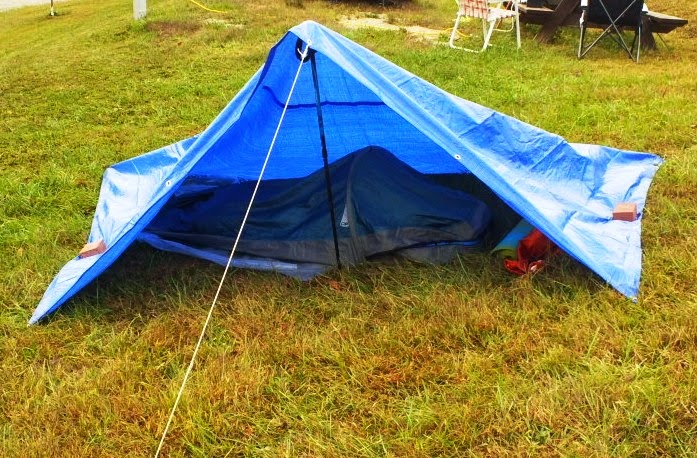 As with the spirit of QRP and doing "more with less"; I decided to take W2LJ's advice and downsize my radio camping gear. The process started soon after the return trip from Elkins WV and the 4,000 ft mountain top. My 15 year old tent was showing a lot of wear and tear. I was afraid a really cold rain might leave me very uncomfortable and possibly even in danger of hypothermia during the upcoming winter months. We both decided to downsize and use simple tarpaulins and bivy sacks for our dwellings.

Our fellow NAQCC club member Steve Ashcraft (KC4URI) and I decided to return to Grantsville WV once again before the snow started to fly. After all, this site is one, if not the best, places in the state to view the Milky Way from horizon to horizon. 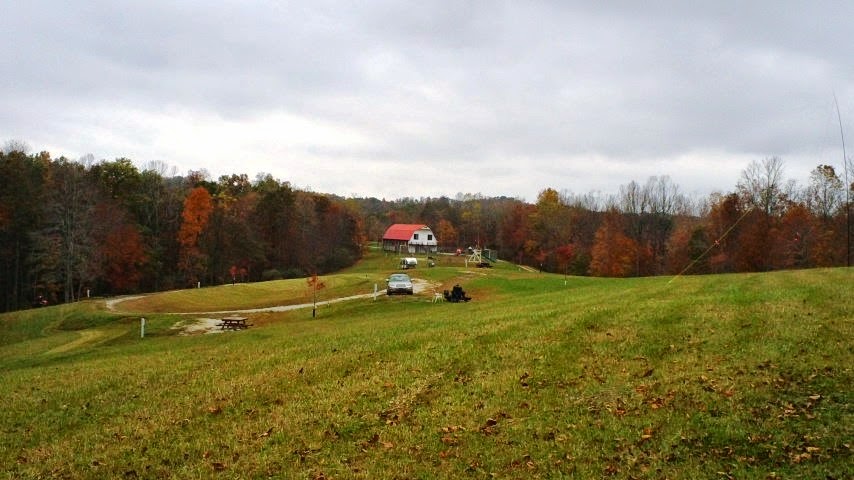 We both arrived at about the same time and soon realized our former campsite, on the top of a 360 degree hill, would be too cold with temperatures predicted to drop near freezing. There was stiff cold wind blowing from the West  too. We were forced to pitch our tarps and bivy sacks on the side of a small hill to protect us from the cold wind.

That's Steve in the background checking the wind direction to maximize our warmth as the temperatures continued to drop towards the 30's. 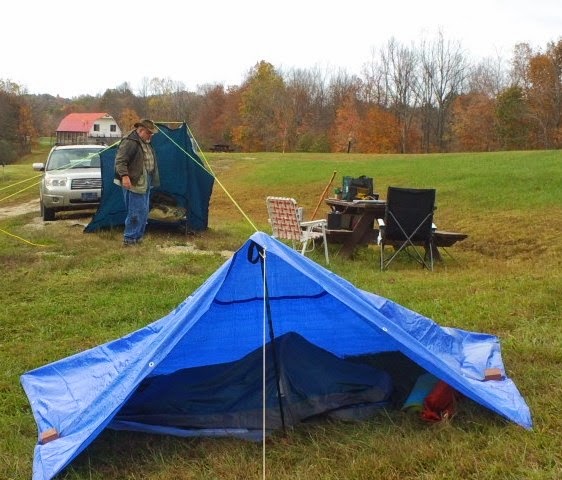 I'm glad to write we stayed quite comfortable with this gear. Modern day fabrics and insulation kept us warm as toast as we arose the next morning to a light frost (only because of the wind). If you look closely, the ice covered much more than just the windshields of the cars. There was a coating of ice from the roof to the tires. 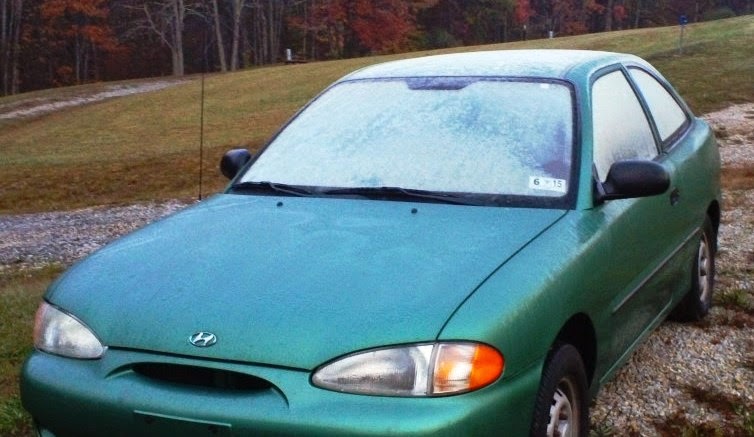 This month is the anniversary of the West Virginia Chapter of the NAQCC Club. It's been a very busy time with two different camping trips in October. As usual, Steve's Elecraft K-1 did a fantastic job with the contacts on the this trip. Of the 15  contacts we made on this trip, 13 were NAQCC club members. 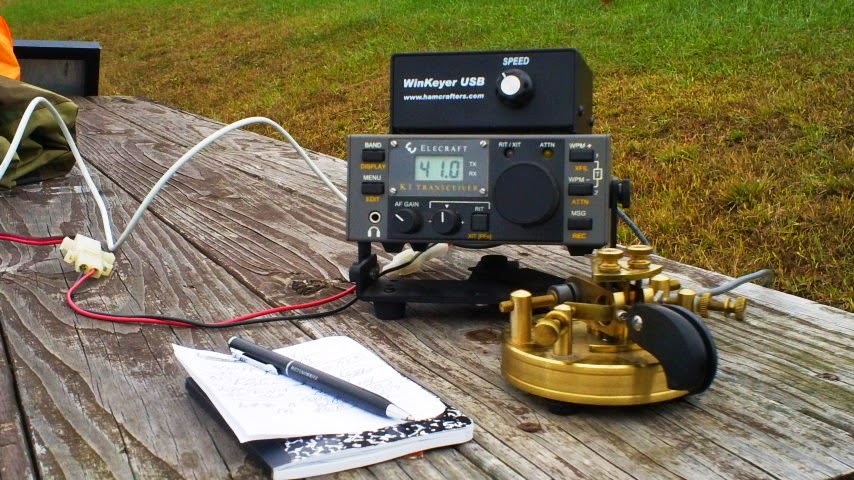 The highlight of the trip was having a long talk with a bow hunter in Wisconsin. Ken (WA9JTU) was at his cabin at the time. It had a nice metal roof which he loaded up for the antenna. Many of the QSO's were about deer, which we saw very little of because of howling coyotes and barking farm dogs in the countryside. A good dog is the best burglar alarm money can buy in the country. It was especially rewarding to work two members of our "core group" who were back in Charleston. Both AC8LJ and W8GDP had 599 signals.

As usual, Steve fixed a great breakfast before breaking camp the next morning. Biscuits and gravy really hit the spot on this cold morning. 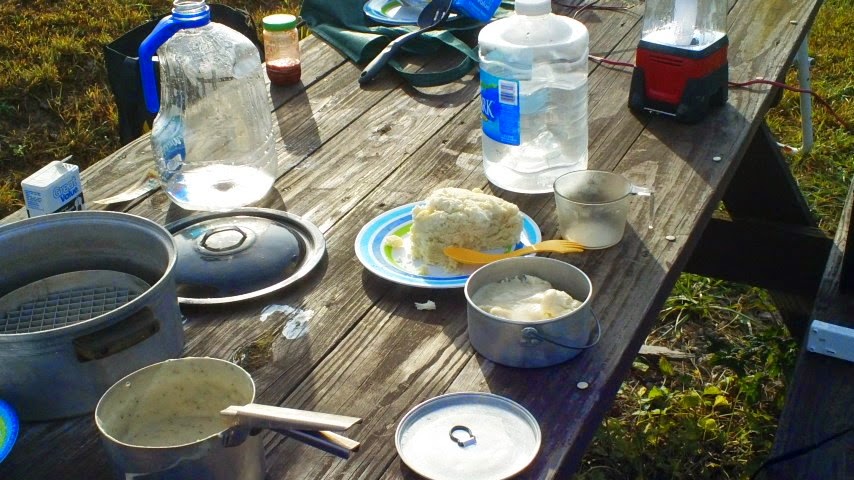 The West Virginia Chapter is having our slow CW net on 40 meters again during the winter months. If you're just kicking around and trying to stay warm, tune to 7.117 MHz at 9:00 PM (local time) and we'll chat about the weather and radio. The net will be repeated each Wednesday night until the temperatures start to rise again.
Posted by Jspiker at 4:33 PM

Hi John, very nice story, me myself I never did any camping. I prefer to stay at home. ;-) But it must be beautiful with all the stars outside at night. You're local time is for me 3 o'clock AM. But when I am awake, I will listen to 7.117 MHz. 73 Paul PC4T

Thanks Paul and I will listen always for the Netherlands stations. The sky is breathtaking at this place and worth a cold campsite for the view. Hi Hi

BTW/ I really enjoy your videos of life in your country. They make me want to ship the bike and take a long ride through the countryside. The Netherlands is bikers paradise!

Hi John, yes, it's a bike country indeed. For me it's the other way around. Next year we plan a vacation in the USA with the family for 4 weeks. I have been only once in the USA, New York City. But I like to see more of the country. Now I realize that the USA is very, very big. We will rent a camper and travel a bit. 73 Paul

I can show you some great RV camping places in WV. Make sure to let me know about the time of your trip!

Good evening John, I really like camping and when I was young and in High school with the scouts we use to go for a 2 week summer canoe trip and in the winter a one week hike in the bush. This was all done in Algonquin park in northern Ontario. Looks like you had a great time and nice to see the Elecraft rig being used and that it worked very well for you.
Mike

I surprise even myself sometimes. I'm going to keep doing this just as long as the batteries and my back will let me. Come join us sometime?