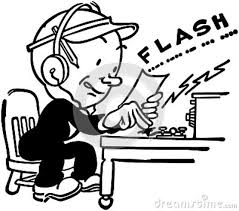 One of my weekly responsibilities for the NAQCC Club is to run a QRS (slow code) net on Wednesday nights. With the exception of when there's a conflict with another club activity; you can find me on the air at 0100 GMT (9 pm local time) on 40 meters. (7.117 MHz)

This is an important project to get those with minimum code speed an opportunity to "get their feet wet" so to speak. I remember those days quite well, and I'm sure all the DX'ers in our club remember those days well too. I don't know about you, but until my retirement, I never reached the "entry speed" for successful DX work of 20 words per minute. That's a minimum in my opinion.

Becoming a good CW operator is a long process for most people; hence the necessity of "taking the time" to encourage newbies to try their hand with a telegraph key. My time running this net is a sacrifice I'm willing to make as I make the painfully slow "code speed" available to the new folks. Last night most of my contacts were around 10 words per minute.

For those of us who "grew up" with CW as a necessity for even getting "on the air", we often take our current skills for granted. It should not be so....

After 25 years of Morse code QRP; I still find the same excitement when working a new station, whether it be across town or 1,000 miles on my slow code 40 meter (QRS) net. Last night was such an occasion.

Earlier in the evening I was hearing a station in Barbados quite clearly along with a strong station in Venezuela.  I was hoping the band was going to be "long" last night. It was....

Propagation was nearly perfect into the Caribbean area as it neared sunset.

Much to my amazement during the net, a station from Cuba  burst into the speaker with a near perfect signal from a thousand miles distance. 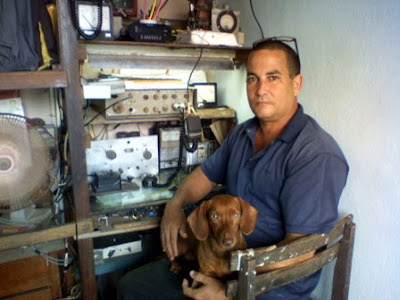 I admire the Cuban hams because the process of becoming a ham is much more stringent than here in the United States. Looking closely at his biography on QRZ.com, it's quickly apparent that Rafael Castellon Machado (CO8RRM) "built" the transmitter he was using last night; and he knew how to use it.

I've made contact with Rafael several times over the last few years but never had a DX station check into my QRS net. He wished me happy DX and the feeling goes both ways. Ham radio us such an amazing hobby isn't it?

It gives us the ability to be ambassadors, in a small way, to all the world.