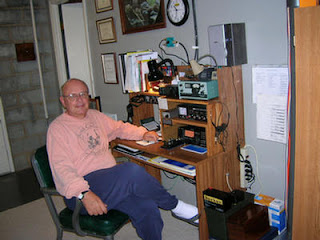 This afternoon, I worked KG4LLQ (Ken) in Asheboro, North Carolina. Ken is my 400th QSO. Not only was it a joy to work him (and get a 579 signal report) but he was also a FISTS member and a new Century club contact.
I doesn't get much better than that. He was also the first contact I've given out my new Century club number. (2066)
On another note, this morning I took an early walk before the heat set in and took the handi-talkie with me. It's was nice to talk to an old friend, and another chap, as I enjoyed the cool morning air. (I'm on 2 meters VERY seldom). They were going to work....yes, it's NICE to be retired.
There's a tremendous amount of misinformation, about QRP, being passed around on the air and my friend was amazed I had worked so many stations the last few years. A lot of folks (especially those not on the HF bands) think QRP means rare contacts, and only a few hundred miles distance. If they only realized....I've worked several 4,000 mile + stations with terrible band conditions.
I mentioned working California twice this year (on 40 meters). I've also worked 20 Canadian stations, and 15 DX stations. I really don't see much difference between 5 watts and 100 watts....I use an indoor mounted "simple antenna". With CW...it's really not an issue. I don't intend to ever operate anything other than QRP.
Ken, in Asheboro, was also the 171st FISTS member I've worked. Another 25, and I'll be hanging some more wallpaper!
Ken KG4LLQ was using an Icom 718 @ 25 watts into a dipole.
FISTS # 10360 and CC # 1666.
Posted by Jspiker at 2:26 PM

Congrats on number 400 and your first as a CC! Wishing you many more enjoyable Qs, FISTS contacts and good DX.

Thanks Jeff...and keep up the good work on the blogs. I enjoy reading them!

Hopefully, I'll be at the 200 fists level soon.