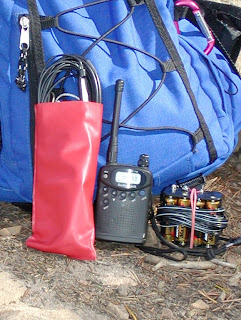 In the mid 70's, I became an "outdoor person". At that time, I was working on heavy equipment and several of the guys I worked with ran a "Boy Scout" troop. They asked me to join them and I developed a "deep appreciation" of nature and became a believer in the "outdoor life".
There are two access points to the " Appalachian Trail " from West Virginia. The "major" one is in Harpers Ferry but "another" is near a little town called Linside on Peters Mountain. Its near the Southern border of the state. Several friends and I used to travel there and stay at an old "farm house" on the weekends. We'd work on the trail to the top of the mountain. It took us several years to blaze this connecting trail.
I still think of that when I work a station near the Appalachian Trail and this morning I worked a station near Atlanta Georgia. The "AT" runs about 2,100 miles from there to Maine. I can cover the entire trail on 40 meters.
It also makes me think again of why I originally became a "Ham Radio Operator".
I think every radio operator has their "specialty mode". I especially like "QRP" operations because it's a mode that can be used in remote area's with a light weight battery, a telegraph key, and a simple wire antenna. But you won't find many operators using more than a QRPp rigs when hiking long distances. The best radio for long distance hikers is a 2 meter HT. I occasionally work a station "right on the trail" even from here in Charleston.
I've hiked a few hundred miles on the "AT" section along the Blue Ridge Parkway near the Skyline Drive and some in the Smoky Mountains in North Carolina and even parts of it in New York. That 2 meter HT can be a life saver in an emergency.
Today, I'm hardly hearing "anything" on two meters. It's a shame it isn't used much now.
My little HT, and extra battery pack to get 2 watts output power, and a pocket "roll up J-pole" can connect me with stations over a hundred miles away. It weighs hardly anything and I never know I'm carrying it along on a day hike.
Posted by Jspiker at 6:08 PM

Hi John, I wonder why we have lost interest for 2 meter? It seems to be so in a lot of countries. Julian G4ILO wrote about it once. And I do. I like to be outdoors in nature. This summer we go for holidays to the The Black Forrest in Germany. I will take my 2 meter hand held with me. I hope there are enough 2 meter repeaters in that area, but I am not sure. You can really get lost there. 73 Paul

In West Virginia, we have repeaters ALL over the place but it's getting hard to get a response out of ANY of them while out hiking in the woods. I hear a few guys during the morning and evening drives to and from work but that's about it.

Despite my back injury, I still day hike and consider a HT essential gear. (especially my 4oz one)

I wish I had an answer about 2 meters but it's all but abandoned now. It's perfect for hikers, bikers, and kayak'ers.

It is a shame. 2 meters is a very powerful & reliable band. I contribute the less use of 2 meters to cellphones and also the dropping of morse code to take the exam, so now people can more easily get the general/extra class license and get on HF.

I took a roadtrip last year using 2 meters and it was quiet most of the time. I raised a few contacts on repeaters passing through and some on 146.520. Being as though there are new ham operators coming all the time, 2 meters is starting to see a slight resurgance. If, in fact the govt sells of the portion of the 70cm band they are talking about, than I would expect to see a lot more people either on 2 meters or 220.