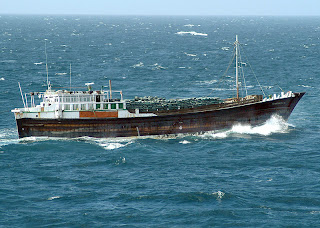 I've been a Ham for about 15 years, so when an "Alaskan Station" (KL7) answered my CQ on 40 meters this morning......., I was a bit skeptical. (Valdez is quite a ways from here)
Sure enough, when I ran the call, it became apparent this was a "pirate" call sign.
I've only worked three "pirates" in my radio career and they've all been on 40 meters. Two of them were using "Alaskan" calls and one was "French".
This particular "pirate" is using another Alaskan hams call "exclusively". (I'm not going to mention the exact call sign) and when I looked it up on the web, there's a disclaimer from the affected ham and a direct link to a FCC investigator.
I e-mailed them both immediately. (and got a response from the FCC almost immediately)
There's not much chance of "catching" a "HF" pirate that makes 60 second exchanges. He always follow the same format. He sends call, qth, rst and 73. But for the life of me, I can't understand the "reasoning" behind this stuff. If I took the time to learn CW and spent the money to put a transmitter on the air, I'd get my license and use my own call.
I'm proud to have my "ham ticket" and take it's responsibilities very seriously.
I was deliberately calling CQ on 7114 MHz because it's a "common" frequency for "new" operators just starting to get their feet wet. Perhaps the pirate thought it would be a good laugh (at someone else's expense). I also have a good sense of humor and will enjoy reading about his "capture" on the ARRL "news line".
Now.......on the serious side of radio.
This weekend I worked several stations in the "North Carolina QSO Party" to give out some "West Virginia" stations for their log books. One of them knew the exact town where my father was born and some local people in the area.
I even assembled a little 1/4 wave "whip" to listen to 15 meters. It's a "horrible" radiator but I was able to hear "several" new hams from the southern hemisphere. LU1FDU (in Argentina) was "booming" in here and I even worked a V3 station in Belize (again sending too fast so won't claim the catch). He DID repeat my call so I know he heard me.
The "Olympic Station" in Canada worked so many stations I couldn't get in a word edgewise and KL7LF in Fairbanks Alaska (for real) worked so many stations on the east coast it was embarrassing. (not me)
I'd like to get on the 15 meter band but chances of that happening are not very good. Perhaps I could run a random wire in the attic but I'm afraid of TVI and stereo problems with the apartment dwellers next door.
It looks like I'll have to settle for the G5RV when the weather warms up this spring.
The picture above is a "suspected" pirate photo from Wikipedia. It was taken by the US govt and is in the public domain. (Notice the "sandbags" on deck to protect from small arms fire).
Posted by Jspiker at 7:40 AM

Could be the KL7 pirate was on this ship ;-) it has a HF antenna. But seriously, a few fellow HAMs have a sick feeling of humor and play pirate once and a while. Luckely most of us are serious players. 73, Bas

Hihi...yes, all things are possible. The ship reminds me of WBCQ ??....I think of short-wave.

For years they transmitted from a ship just off the coast of the US in International waters. (Hope I have the call right). I actually listen for SWL pirates on the weekends and special holidays. Some of them can be very interesting.

Never expected to hear any on 40 meters. (grin)

I could never figure out the "pirate" mentality, either. It's so much more fun to keep it legal!