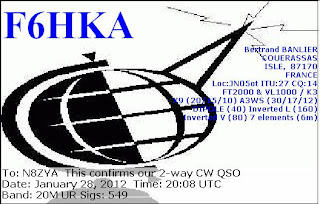 I've enjoyed the Straight Key K3Y Century Club event this year. I have a total of 10 contacts now. Although they have not been in 10 different call districts, I've worked this French station (F6HKA)  twice for the K3Y Anniversary event. On January 5th, I worked Bert on 15 meters, with my indoor dipole. This afternoon I worked him again on 20 meters, with the indoor Isotron antenna.

I've worked Bert (F6HKA) a total of five different times now, so when I heard a good strong signal from him this afternoon, I immediately reduced my power to 3 watts.  Surprising to me, I caught him "first time" as he finished up a contact with another American station.

Bert always remembers me when he hears my QRP signal and made a comment about this being the "second band" we've worked during the K3Y event. He also found it amazing when I told him that I was using only three watts of power.

Although I haven't been "chasing" the K3Y stations, whenever I have some extra time, I tune around the SKCC frequencies to see if anyone is on the air. I've worked a Michigan station (K3Y/8) several times. I have to commend Bob (K8MXC) for a tremendous job with the Straight Key Century Club. He makes a fantastic effort to be on the air with the club call sign.

On the DX side, I've also worked the K3Y/KP4 station in Puerto Rico.
Posted by Jspiker at 7:51 AM

It sounded like a great weekend of op's time. As for me I had to work on Saturday evening until 6am. So the op time was limited to Sunday.

I got an e-mail from Bert about my three watts power. He was very encouraging. The next time the band is good, I'm going to try working him with one watt.

He's worked at least "one" on the east coast who was running less than a watt.