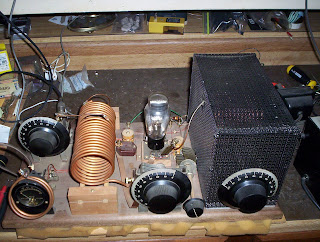 "The transmitter was running at 10 watts input and a copy of a 1928 QST design. Hence part of the exchange was "28mopa" meaning a transmitter from 1928 and a Master Oscillator Power Amplyfer, it uses vacume tubes and has about 5 watts output".
That was the response I received from an e-mail I sent to Scott (WA3FFC) in Brookville Pennsylvania a few days ago. (I worked him in error on the SKCC weekend event)
His signal was SO unique, I assumed it was a home brew QRP rig. And I was right (hence the e-mail to confirm my guess). I don't work a lot of stations on 80 meters and was surprised that he heard me.
It had a slow, almost musical, chirp when I answered his CQ. Scott said he worked a little over 60 stations in the 48 hour time period. That's a LOT more than I've ever worked at once!
I've worked a few "parasets" and even an old CIA radio but:

This is by far, the most unique radio I've ever worked!

Scott (WA3FFC) is a member of the " The Antique Wireless Association"
And I must say, a real artist.

This transmitter is a beautiful piece of work!
Posted by Jspiker at 7:02 AM

Real neat contact. Sort of follows those stories by Jean Shephard and his radio days.
When I first stared PSK , a lot of the Cuban stations were archaic rigs, and I'd have to chase them up or down the band to copy them. Never see any like that any more.

My first QRP rig "drifted" a bit ...and the "rock bound" sets always responded with "QSB" but not so. Fortunately, the "RIT" control is essential part of the rcvr these days!

Nice to hear from you Bill.
Happy Caching!