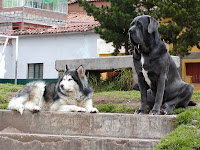 I caught N1FN (ET) near Denver Colorado last night, after running for a little over an hour. I was "fox hunting" and the band was VERY long on 20 meters. He was one of two QRP operators being chased by a pack of hounds in the United States. He is 1,247 miles from me here in West Virginia.

I heard him at the very beginning of the hunt as he danced along at around 30 wpm (a bit too quick for me). But I understood the "call" and was able to recognize his "CQ fox de N1FN UP".


I had all but given up on the chase until I heard him send "zero beat" at 10 pm.

The filtering on my 703 leaves a lot to be desired so it's 'difficult' for me to set up the 'split' on the radio. Trying to attenuate a 5 watt signal at 1200 miles is next to impossible.

The other "fox" last night was K4BIA in Georgia, and I usually work him easily from here. But I never heard so much as a bark. As a matter of fact...I heard little 'barking' from anyone.

You can read all about "fox hunting" (a QRP event) from the link on the right side of this page.

I've been feeling a little "down" after being in New York for a few weeks. My location on the Hudson River made it easy to work DX stations in Eastern Europe . I even worked a QRP station in Washington State while using my "ZEPP" antenna. It was strung in the attic of an old home.

But working ET (N1FN) last night, with an 18" Isotron antenna makes me feel a little better.

The 20 meter antenna (at the top of this page) is the "little" one on the bottom right.
Posted by Jspiker at 6:16 AM

Nice catch on 20M. As for antennas, we make do with what is possible; your Isotron, my Buddistick. Isotron or Buddistick, beats QRT.

Is the Isotron your only antenna? Don't forget to post which one in use IF you do have an alternate.
73 de Dick

Most (99%) of my contacts are with the Isotrons mounted indoors attached to a painters pole (bungee corded to the bed post in a spare room) as per the photo on the web site.

They've worked amazingly well for me and EASY to set up and take down. (I don't use the 80 meter antenna very much)

I have a G5RV but have only used it from the Outer Banks of North Carolina. It's not easy to find 102 ft of free space in a rental house.

My favorite "travel antenna" is the 20 meter (18") Isotron but a few weeks ago, while near NYC, I took a ZEPP and strung it in the attic. It's a GREAT little antenna and much easier to use than the G5RV.

With the exception of Cuba, Jamaica, and Puerto Rico (a few years ago from North Carolina with the G5RV), and this years contacts from New York, (a Zepp), the rest have been the little 20 meter Isotron or the 40 meter Isotron.

For the Isotrons (from WV home) I have Germany (several times) Poland, Hungary, the Isle of Mann, the Baleric Islands on the far side of Spain, (plus the mainland of Spain a couple of times) Finland, Italy (a couple of times)Croatia, Belgium, and Portugal.

My Isotrons have logged more than 400 stations since I retired a few years ago.

I also have 107 QRP stations logged (the vast majority on 40 meters)and this year I've worked California twice on 40 meters.

I know there's better antenna's out there but for a QRP station forced to operate indoors....I very happy with them.

I don't plan to ever operate anything but QRP because I can set it up, or take it down, in about 15minutes.

I think if I ever buy another antenna, it will be the "buddipole"...they seem to be an excellent "portable antenna".

I'm impressed with your contacts from the window sill in NY. I would never thought it was that easy.

WG0AT, from Colorado, worked Switzerland with one a few weeks ago...

ps....I'm still in remorse from the recent trip to the New York City area. It was REAL easy to "skip across the pond" from up there with QRP and the Zepp.

The solar flux is still in the mid 60's...is it ever going to get better?