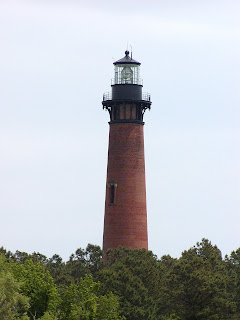 I don't spend much time using 'SSB' with my rig but I had high hopes of working a few "Special Event Stations" this weekend. There were also lot of "International Lighthouse/Lightship" stations on the air which I hoped to work.
My biggest hope was to work the Arecibo Lighthouse, in Puerto Rico, and it would have been an exceptional catch. There was also a station celebrating the "Navajo Code Talkers" and another celebrating the "66th Reunion of the USS Intrepid Crew Members". We used to sail with them when I was in the Navy.
But I didn't catch either the "code talkers" or the Intrepid on the air.
Instead, I found myself in the middle of the North American QSO Party.
I worked a bunch of them, very quickly, in 11 different states. My catches were Minnesota, Illinois, Vermont, Indiana, Louisiana, Texas, Massachusetts, West Virginia, Kansas, Utah, and Colorado, plus Ontario (3) and another one in Quebec.
This morning, I also worked 4 lighthouses. I caught #001 (K2BR/LH) near Atlantic City New Jersey (Absecon Lighthouse), and three others on Long Island in New York. (W2GSB/LH-K2EC/LH-and W2AMC/LH)
Among the stations I worked, most gave me GREAT signal reports. Several of the lighthouses responded with S9 to +10....they had NO idea I was operating 10 watts QRP until I told them.
I'm sure many people made hundreds of contacts this weekend but I don't imagine they had more fun than me. I really enjoyed myself....
Posted by Jspiker at 12:50 PM