What Does Radio Mean to You? 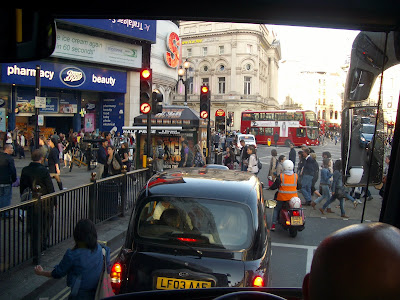 I've been in the Untied Kingdom the last several weeks, so no time to spend writing about the ham radio hobby. (hence the big gap on the blog) Since I've been gone, several of my friends have given up on blogging. It's caused me to wonder why I spend time writing. To those of us who are battered with rising noise levels and operate under less than favorable conditions, this hobby has become more of a challenge everyday. I can understand why they're discouraged.
But I still can't deny my fascination with skipping signals into the sky, and never knowing where they will land, and to whom I will have a nice chat, and learn about their lives in the cities, towns and country where they live. For me, getting on the radio and talking to others is similar to traveling in the world. It doesn't make any difference if they're 50 miles or 5,000 miles away.
I've heard many shortwave stations while visiting distant places in the world. While on this trip to the United Kingdom, I stayed across the street from the BBC in London for a few days. One night I listened to a GREAT program about the guitar player Les Paul which was hosted by another guitar player named Dwayne Eddie. (I take along a little Grundig SWL pocket radio)
I can't imagine living without access to the worlds radio waves. Perhaps it's a form of paranoia but I consider radio fundamental to a thriving and prosperous society. Listening to radio (in any form) is like looking into the eyes and the minds of it's people.
But it's only "accurate" when programing is objective and allowed to flourish without undue monopolization of limited airspace. I thought often about the difference between programing in the United Kingdom and here in the United States on this trip. It was wonderful to actually hear "music" in England, and a well done documentary, about a variety of different subjects. Other than National Public Radio, here in the US, there's no comparison to the drivel heard on our AM stations.
I had a great time while traveling from the tip of Scotland, down through Whales, and into England. (actually it was a coach with a VERY good driver familiar with the left side of the road)
I was especially impressed with the city of London.
I'm disappointed that some of my blogging friends have decided not to write any more. I'd like to read more about their daily lives regardless of their radio contacts. Knowing we have the common bond of radio enhances our lives in so many ways.
I'll miss reading and seeing pictures about their lives on their radio blogs.
Posted by Jspiker at 9:11 AM

Hi John. I hope you enjoyed your time in our country. It's a shame you didn't have any radio communications so we couldn't keep in touch. I'm wondering if you were in London the same time we were.

I agree with you about the BBC. Some of your countrymen online are a bit disdainful of the fact that we have this compulsory "TV tax" which pays for it, but it is only that which allows us to have this high quality programming, free of commercial considerations. The nearest you have over there are stations like poor WCPE, the classical station, constantly begging for donations.

However as to the role of radio itself, you can now receive this programming via the internet. The traditional delivery over the airwaves is no longer the only or even the best way of receiving it. You can carry on listening to the BBC back in Virginia, and I could have a QSO with you on EchoLink, neither of which would be possible (or very easy) using radio. Which has been causing me some reflection on the point of ham radio and the justification for continuing to struggle with compromise antennas and rising noise levels, as you can probably see from my own blog postings.

Anyway, glad to see you back in the blogosphere, and looking forward to reading more of your adventures in Britain.

Hello Julian. Thanks for the comments and especially the explanation of how the BBC does such a fine job of programing. I had a gut feeling that it was due to excellent management more than anything else. Didn't know about the tax but not much is free in this world. Anything that sounds "too good to be true, usually is"...

I've read your comments about echo link via a cell phone. To me it sounds promising for keeping in touch with other hams in far away places. It's like keeping in touch with family. Perhaps I'll try it sometime and we can actually talk to each other via the web while out on a summit. I don't think there's a link in my immediate area so a cell phone would be the only option.

We could have very well been in London at the same time. We stayed across from the BBC radio building at the Langham Hotel and we walked several times to the theater district and spent some wonderful time in Hyde Park and around the London Eye.

I'll be writing more about the trip later (on a different blog) and will send you the link when it's posted.

We had a fantastic time even tho there was a lot of "coach" time. It was most enjoyable to be able to "walk" when we had several free hours to walk around a town. I loved the concept of the "right to ramble" out in the country. Wish we had something like that here.

We spent a total of 3 days in London. Saw a couple of shows (Wicked and Billy Elliott).
Wish we could spend a least a full week here sometime.

Interesting post John and I share your love of entertaining, informative and well produced radio. I wish we had a national radio network with a commitment to high quality programming in this country in the same way that the BBC has a mandate from their government in the UK. As you now know, the BBC is funded primarily by revenue from TV licenses, which leaves them free of the need to air commercials or stage fund drives. Until 1971, a license was even required to operate a radio set! Thank goodness we at least have NPR.

Radio broadcasting is too valuable a resource to leave entirely to the free market but with the exception of public radio, that is what we have done here in the US.

I enjoy your blog and will be reading the archives as well as following future posts. Please keep posting!

And I'll be watching your blog and hoping for posts about your QRP AM station.

It's not "cost prohibited" and should easily encompass an audience of a thousand people. In my immediate area, 9 out of 10 AM stations are owned and operated by the same corporation. (same man and he's in a political race now). Wonder who's going to win this election? The deck's a little stacked here.

Gratefully, I have a decent AM receiver and can hear stations in the neighboring states quite easily. (although with a little white noise in the background).

I'd go nuts without them.