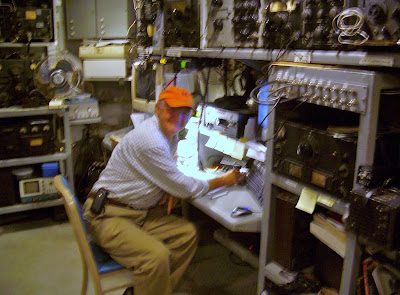 Yes...that's me in the photo.
Yesterday, I took a quick drive out of the valley to visit an old WW2 warship that was docked on the river at Marietta Ohio. LST 325 is home ported in Evansville Indiana, but the ship traveled here for festivities associated with the Ohio River Stern-wheel Festival. I consider the LST to be the worst riding ship on the seas, due to its long flat bottom. It was designed to transport tanks and troops during World War Two. It rode worse than a destroyer....., and that's saying a lot. 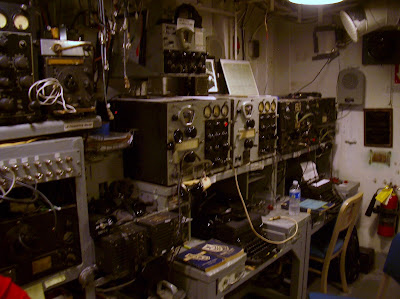 I was a signalman on a Destroyer during the Vietnam conflict, so can identify with these small ships. I've also enjoyed making radio contacts with these history makers. My log book lists an old Coast Guard cutter up on the Great Lakes, a battleship in North Carolina, an old Destroyer in Baton Rouge, and a Submarine near Pittsburgh Pennsylvania.
As I exited the Bridge on LST-325 (these ships had no names), I asked one of the Crew Members if the radio room was still functional. To my amazement, he stated there were several hams aboard who kept it alive and well. Could I possibly see it? I asked. Better than that, he explained, they were actually on the air. And yes, let me show you where it's located.
I thought (being a ham) ....does it get any better than this? Well yes...it actually does.
Let me explain..... 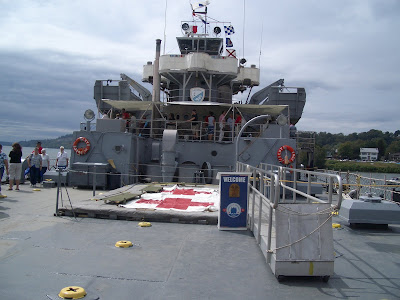 As I was escorted back onto the bridge, the crew member led me into the "radio room" which was behind the Helm and Engine Order Telegraphs.
I was in Radio Heaven now.
I met Bob Pointer in the radio room (N9XAW) and we talked for a few minutes about the 600 watt transmitter and antenna's on the ship while dits and dots filled the background of the room.
Would you like to operate the radio? He asked me.
Are you serious?.... I responded.
I was ecstatic. So.......
Being a QRP operator, and thinking of 40 meters, I sent out the ships call (WW2LST) on 7040 a few times but got no response. I then tried the 40 meter FISTS frequency of 7058.
Hummmm....nothing on either frequency.
Bob suggested I try 20 meters and re-tuned to 14.027 (I didn't know the intricacies of the buttons, dials, SWR needles on the tuner etc) but he had it tuned perfectly in only a few moments.
I sent the ships call out again, and this time, the " K6AA Club Station" answered from San Pedro California.
It was a weak signal, with heavy QSB, but we managed to exchange the basic information. John stated they were a "club station" near Los Angeles California, and on the coast. When I stated earlier in this post "does it get any better than this? Well yes...it actually does", here's the explanation.
My wife and I were in Los Angeles a few years ago, awaiting a long flight, and we stayed in a Hotel near Huntington Beach. Several times we walked down an old "rail to trail" path from there to the shore to watch the volleyball players. (This beach is famous for Volleyball).
As we approached the shore, I noticed a large white building with dozens of wire antenna's and a large beam on the roof. I specifically mentioned to her that "I'd love to get my hands on that transmitter and those antenna's someday".
I assumed it was a Coast Guard Station.
But if you've clicked on the links to the "K6AA Club Station" , (on this post) by now, you'll see the "Maritime Museum". It's an enormous white building with lots and lots of antenna's on the roof. I remembered it immediately when I saw it from Google Earth program and all the things around it.
We walked right by this station and I made those comments. This was the station I worked today with the ships call (WW2LST).
Thanks again to Bob Pointer ((N9XAM) for a wonderful chance to operate the radio. I had no idea I was talking with a west coast station, that I was actually familiar with, from several years ago.
I'll remember this contact for years to come.
Posted by Jspiker at 8:49 AM

Hello John, what a great experience to make a great day. The NUGB of my vanity call was assigned to the light cruiser Amsterdam which saw service at the end of WW2. Named after a lad from my town who died at Pearl Harbor.

Hello Dick....yes, I feel fortunate.
I've read about the Amsterdam too. My old ship is at the bottom of the ocean near Greece feeding the fish.
It was sold to their Navy and when worn completely out....donated to Davey Jones.

How about the Amsterdam?

The Amsterdam went to the breakers soon after WW2. Your ship is now contributing to the Med ecology. An honorable end. 73 Dick