One of the things I learned early this hobby was that I could work the length of the Mississippi River with a QRP signal. The other day I worked N5GW in Vicksburg Mississippi which is right on that river. Gene was nearly 650 miles from me but I had a good stable signal from his QRP station at five watts of power. We talked for a little over 45 minutes and he was using a "simple wire antenna" with no gain.

I think of  Samuel Clemens  (aka Mark Twain) every time I think of this river. Among the many hat's he wore in his lifetime, one was that of a river boat pilot. 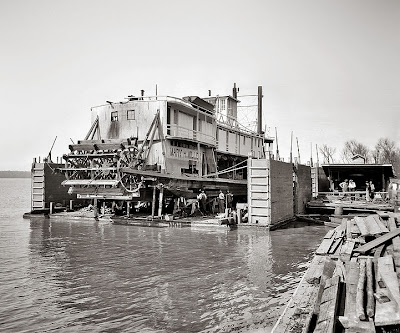 Although I've never piloted a ship (well a few times in the Navy) I worked as a deck hand on the Kanawha River once. We pushed coal barges from the upper end of this river and along the wide Ohio River while dropping off and picking up coal barges along the waterway. I did get a sense of life on the river and found it an interesting occupation. 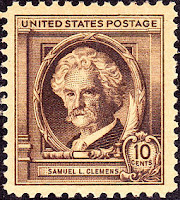 Samuel Clemems has been an inspiration to me.
In 1909, Twain is quoted as saying:

I came in with Halley's Comet in 1835. It is coming again next year, and I expect to go out with it. It will be the greatest disappointment of my life if I don't go out with Halley's Comet. The Almighty has said, no doubt: 'Now here are these two unaccountable freaks; they came in together, they must go out together.'

His prediction was accurate – Twain died of a heart attack on April 21, 1910, in Redding Connecticut, one day after the comet's closest approach to Earth.
He wrote his autobiography near the end of his life, with the requirement that it only be published 100 years after his death. I haven't read it yet, but hope to soon.
Posted by Jspiker at 2:39 PM

I love Twain's "Life on the Mississippi". In fact everything he wrote, including his later "dark side" books. 73 Dick

I've added a link under the caption "Samuel Adams" to this post. There's a LOT of information there.

I see him as a person capable of learning from his mistakes and adapting his life accordingly and I've always admired adaptability and resourcefulness in an individual.

Life to me is an ever changing process. I either change with the times or they go on without me. It's a learning experience...

He was a good example of this.

I've been looking at the new e-readers lately. His books will be one of my first purchases. I'm thinking of the "Kindle" above all the others.