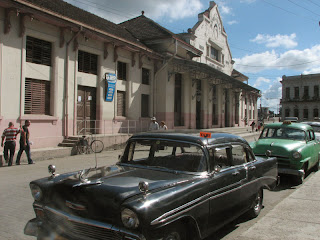 I'd like to visit Cuba someday, so when I heard CO6LC in Santa Clara Cuba this morning, I dusted off the microphone (this is rare for me) and made a quick 59 contact with my QRP rig. I've worked Cuba before but my last contact was from the Outer Banks of North Carolina. Today's contact was easily made with only one of two attempts from my Charleston home. (despite the competition of many many stations)  My previous contact with Cuba, a few years ago, was Eduardo (CO8LY) in Santiago Cuba. This mornings contact was made with 10 watts SSB.

Santa Clara has an interesting history with Short Wave radio.

In 1958 Che Guevara created the clandestine radio station "Radio Rebeld" (Rebel Radio) which broadcast news to the Cuban people. Today, it uses 44 transmitters on the FM dial covering 98% of the island. Guevara  copied the idea after observing the effectiveness of a CIA supplied radio station in Guatemala. It was it as an effective tool to overthrow the Guatemala government of Jacobo Guzman. 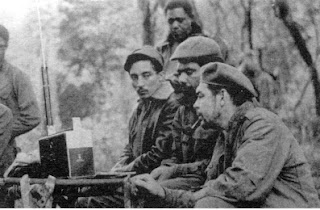 My original hopes for this mornings contact was the host of the Cuban Radio Program "DX'ers Unlimited" that I hear on the short wave bands here at night. Arnie Coro (CO2KK) is the host of that program. It's an excellent show to which I listen regularly on the 49 meter band.

I think the importance of radio is vastly underestimated these days. Especially it's ability to reach a large audience with little cost. Several years ago, I reached my tolerance with AM talk radio here in the United States and am still toying with the idea of putting a low cost AM station on the air in this valley.

If so....it will be a simple portable micro station. It's perfectly legal when designed and operated according to current FCC regulations. I'd like to see much easier access to the AM radio bands and much more allowable  power in the future. Several states, here in the US, are submitting legislation with the hopes of allowing more freedom on the airwaves. Unfortunately, West Virginia isn't one of them.
Posted by Jspiker at 10:56 AM

Hi John, I worked Arnie last year. He is a very nice fellow. A few years ago the the Colorado QRP Club had him as a guest at one of their large get-to-gethers. He was a sensation. And a great home-brewer considering the lack of material in C. I hope to work him again from my home QTH. 73 Dick

What a great example of the friendship and fellowships that can develop in this hobby. I had no idea he had visited the US as a radio personality. I've often said that people the world over have much more in common than differences and ham radio is the perfect example. I'd jump at the opportunity to spend a few hours with Arnie. He's an inspiration to all of us.

Thanks for letting me know he was able to visit us in America. I wish we could do the same.