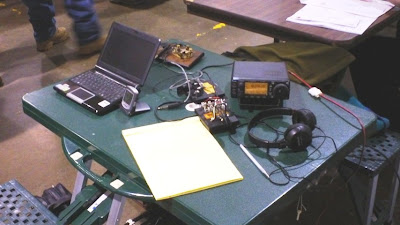 I sat my little QRP station on the table which I use for my field operations. I talked to people as it monitored the 17 meter band in the background. When I heard an especially nice signal, I stopped the conversation, and pounced on it, in an effort to complete my daily DX contact.

It didn't take long; and I announced, as a request from the organizers, that I made my daily DX contact with OV1CDX in Denmark. I actually worked him twice during the day, as well as other stations in France, Croatia and Spain, but surprisingly, I spent very little time on the air. I spent the vast majority of my time talking to a lot of people!


I enjoyed this very much, as I once again saw many old friends, and perhaps, even a distant relative. It's funny how your radio signal usually skips right over nearby stations, and you're unaware of a lot of people, but I had a very nice conversation with Carl Smithson (NN8K).

I found it incredibly amusing as Art Ellis (W8PBO) walked around with a Morse Code Tudor in his pocket. That little device made it easy to recognize fellow CW operators in the crowd. . Hihi I also had a very interesting conversation with a "tower climber" (Joe Scherer) who wanted to know about some of the antennas he installed at a little over 800 feet elevation. Some of my best conversations were with former Navy radio operators yesterday and I also talked to several new hams.


I was very lucky when I found my antenna precisely "sloped" towards the Northeast yesterday. The high end  was easily 40 feet in the air. My only obstacle was a worry about 70 feet of coax feeding the center balum. That's a long distance for QRP work, but it didn't seem to be a problem. I had to re-position the antenna closer to the building to get the feed line to my picnic table.

The weather was also a factor. We had showers last night, and the forecast was a possibility for thunderstorms during the Hamfest. I kept a close eye on this but they didn't materialize until I was taking down the antenna. I felt the first few sprinkles as I wound up my kite string on a wooden spool.

Should they ask me, I'd do this again next year. I liked the conversation with old and new friends this year very much. It was fun!

I must have talked for four solid hours; especially after the committee announced over the PA system that I was set up and working DX with 5 watts. Hihi

Right before I dropped the antenna, I got my hands on a KX-3 and easily worked Spain. Power was supplied with just AA Batts. It's a great little radio.

It was very fun!

John, I had actually printed your blog and laid it on my desk so I would remember to listen for you. As I had figured, it was a bit early for 17 in my world and the solar activity rendered the band useless. I sure hope to have a QSO with you someday. So glad you had a great time and were able to snag some DX while you were at it, both far and away :) It's been ages since I've attended a hamfest and I'm looking forward to hopefully attending a few again.

Alaska is a very difficult place for me to work and I would have been surprised to hear you. Not a problem as radio is a lot like fishing; sometimes the fish just swim upstream to different places.

The orientation of the antenna had much to do with working those stations yesterday. Although a dipole, it was sloped right towards Denmark, and exactly the opposite of Alaska. I topped a tree about 60 ft high on my first attempt with the trusty 'ol slingshot. The other end was about 30 feet from the ground.

As the weather warms up, I'll spend more time outdoors and away from all this electrical noise here in town. I'll slope the next 20 meter antenna towards your neck of the woods. We'll work eventually . It's only a matter of time.

Quite a turnout at the hamfest. Very encouraging, that. Congrats on the QRP CW DX contacts. Good to have made them in front of witnesses, hi. Maybe some more QRP converts?

After all the DX contacts, I still get an enormous kick out of working a guy sitting at a picnic table. Hihi