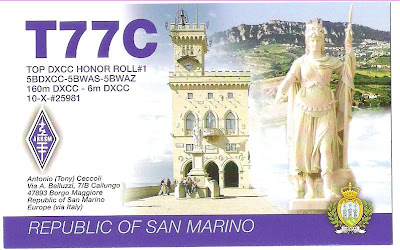 I've been hearing this station for several weeks but was never able to work him because of huge pile-ups on the frequency. It's an unusual prefix, which should have gave me a hint, but I never thought the Italian address had the significance of being a separate entity. It was ignorance on my part, and as I looked at the DXCC list that I keep with me at all times, I realized I had worked, and added another new country to the log book.

San Marino makes my 79th DX Country and it's a small independent country which is completely surrounded by Italy. It's only 24 square miles with a population of around 30,000 people. By comparison, my home city of  Charleston  is just a little larger, with 32 square miles and 51,000 people.


San Marino claims to be the oldest surviving sovereign state and constitutional republic in the world, as the continuation of the monastic community founded on 3 September 301---


The country's economy mainly relies on finance, industry, services and tourism. It is one of the wealthiest countries in the world in terms of GDP (per capita), with a figure comparable to the most developed European regions. San Marino is considered to have a highly stable economy, with one of the lowest unemployment rates in Europe, no national debt and a budget surplus.[1]


I also worked other stations today. Early this morning, I worked OR5T in Belgium. Soon after working T77C in San Marino this evening, I worked S53OQ in Slovenia.

Today also marks my 81st day of working at least one DX station a day.

Good morning John, I had seen T77C spotted on the clusters but was not able to hear him up this way at all. Great work on picking him up and making the contact.
Mike

I seem to be in the right place at the right time. It's the luck of the draw sometimes.