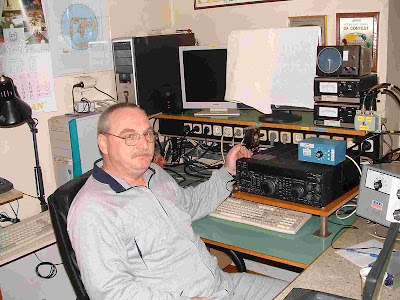 I was up early this morning and drove to my hometown of St Albans where I had a dental appointment to install a new "crown" on a bad tooth. I had broken this tooth several months ago, and the dentist was unable to repair it due to infection. I had the "root canal" done by a different dentist; and this mornings crown on the tooth was the completion of the project. The repair bill on this tooth was close to $2000 USD.

I once told a native on an isolated island (national health care) how much dental work cost here in the United States. To this day, I think he thought I was lying to him.

St Albans is about 15 miles from here, so I was on the road around 8:30am. That didn't leave a lot of time for the radio; but I managed to work an England station before leaving for the Dentist.

I've worked Tom G3HGE several times (three) previously. He was using his favorite  KEY  this morning. This morning was my 13th English QSO.

I rushed home from the dentist and changed clothes and then Marilyn and I drove downtown to hear a classical string trio perform a Dvorak piece called the "Dumky". The Sarosvati Trio (piano, violin and cello) did an excellent job with this piece of music. Dvorak wrote it in 1891 after returning from a concert tour in Russia. The subtitle "dumky" is a Ukrainian word suggesting a pensive, melancholic mood.

We had lunch afterwards at the Kanawha United Presbyterian Church and then returned home.

I turned on the radio almost immediately and heard a strong Slovenia station calling on 17 meters. I was able to work S57DX on the first attempt. We've also worked before. (three times)  I've worked a bunch of stations in Slovenia in the last several months and today marked my 13th contact.

Sorry about the dental problems. The prices are shocking! I'm in the process of having a partial-plate replaced. After French insurance, out-of-pocket cost will be something like 275 Euros. Wanted it done now rather than wait for my return to the USA where it would cost 4 times as much.

I use "teeth" as a good example of the general "health and happiness" of different cultures in the world. I've traveled a lot; and every time I see a person "smile", it speaks volumes about their society.

Unfortunately, there's a lot of toothless and poor people living in WV now. Their smiles are not that good.

You're wise to have your dental work done there in France.

Woot! Keep up the great work, John! Yea, they are expensive as I have 3 crowns! I try not to think about my aged IC-756PRO and what I could have sitting on the shelf had I spent that money on a rig! Been having some nice openings here into Russia, Europe and points east in the evenings and early morning hours. The sun is returning and soon it will be time to dim the lights in the shack and head out and play in the midnight sun! Can't wait! As always, I enjoy your adventures!

If you are interested, the charges for dental work on our National Health Service are here: http://www.nhs.uk/NHSEngland/AboutNHSservices/dentists/Pages/nhs-dental-charges.aspx

That said, not all places have dentists that work for the NHS. We hope to have one here later this year.

My dentist is a ham so I actually look forward to going. I always take a ham radio show and tell item. I have a broken tooth right now so we will see what the cost is these days.

Thanks for your comments about dental care, especially in England from Julian, Mike in Canada, and Dick in France.

I have three crowns now, and with the extra expense of the root canal on this tooth, have around $4,000 invested in my teeth.

Throw in the charges for extraction of molars, fillings, cleaning, X-rays etc, and I'd say, well, I don't want to think about it, easily $6,000 USD.

As Phil in Alaska said....a mightly fine rig sitting on the desk. Hihi

I don't think my expenses are "out of the ordinary",( I'm using the average US citizen as a reference) actually, I've got good teeth since I don't smoke, chew, eat a lot of sugar, etc.

I see a LOT of people, here in Southern WV, in the 60+ year age group ashamed to smile and say good morning. In essence, they're toothless. They, literally, let their teeth rot out because they can't afford to have good oral hygiene.