The Bad News and the Good News

This morning while waiting for the 17 meter to make it's daily opening, I called out on the 40 meter band to an old friend who once lived near the paint store where I worked for 21 years. We haven't talked in several years; so we had a lot of catching up to do. As a sign of good operating procedures, we shifted upward a bit from the QRP calling frequency.

There's been a lot of "grumbling" lately about digital operators "tuning up" right on top of anyone, anytime, and anywhere. This morning I received the brunt of LID operators in full force. It's beginning to be enough of a problem to enrage a saint.

I responded with the customary "please tune up somewhere else" to deaf ears because this station couldn't  copy so much as a "dot", and I angrily thought, "why on earth would anyone using a "digital mode" choose the 40 meter QRP CW calling frequency" to run a "test" on their equipment?


I think the answer is "they don't know" because they just can't "hear" us. 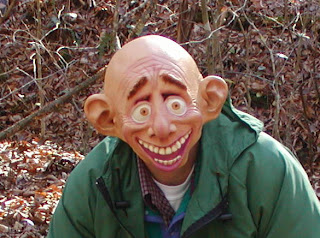 It's sort of like 'good 'ol boys' hunting deer in the woods. They think they "see" something out there. They take a "wild shot" at it, and then go over to see what they "got". When they get there, they discover the only thing they "got" was their best friend with double ought buckshot.

As a better example; I cringe whenever I see a picture of a nice station on the web that doesn't have a "key" on the desk. I think it says ham radio is all about buying software, buying the best radio, the most expensive antenna, and the best high power amplifier.

Hell fire....money can't buy everything; and some people actually take pride in using the simplest form of communication decipherable with only the human ear.

There....now I've got it out of my system; and I feel better about it.

No sooner than I tuned to the 17 meter band, I easily worked a station in Northern Ireland. I never gave much thought when I worked MI6GTY ----until I looked at his profile on the web. I was so surprised that I gave him a second call, which I might add, he answered immediately. 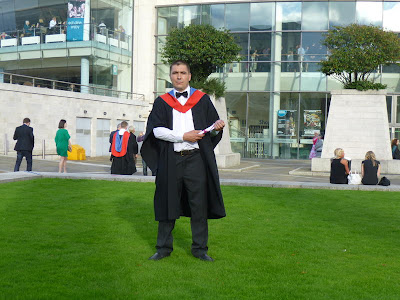 His profile picture reminds me of myself in many ways. I also earned my college degree in my later years and I also don't send "QRP" on my opening exchange with DX stations.

I asked him specifically, on my second contact, if he was doing the same. He answered a proud "YES" and I likewise, sent my name and QRP @ 3 watts. 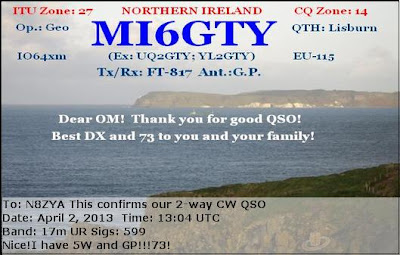 I don't work a lot of other DX QRP stations, so this morning was especially rewarding. After all the frustration on 40 meters, I needed some good news, and "got it".
Posted by Jspiker at 9:40 AM

Quite right about QRP not being heard by many digital operators. Also non-digital folks too.

The Northern Ireland contact was definitely the good news.

But we seem to have lost all civility with the local digital modes. It would be helpful if they understood the terms QRM, QRL and QSY PSE. Unfortunately, none of those worked this morning. Yes...even CW operators are guilty too.

The situation is getting so bad, its like they're hunting squirrels with a machine gun. Heck...all you really need is a sling-shot.

Hello Dick, everyone has fun with radio on their own way. But I can imagine the point of view. CW is a art and I wish I was artist enough to learn the code and to practise it. Till now I'm only thinking about it. But though your blog inspires me a lot. One day I will make the big step! 73, Bas

I love it....although learning it takes a little time, it's still the most simple form of communication ever devised for the human ear.

When you're ready, drop down on 40 meters with a straight key. There's always good operators there who will match your sending speed (whatever it may be) and lead you down the path to years of enjoyment.