I had a VERY nice, long 40 meter (7058 Mhz) QSO this morning, while waiting for the cholesterol medicine to "kick in" before breakfast. We must have been exactly the right distance, for the first bounce, to get signals (both ways) like this. I threw the call sign out this morning about 9:30 (est) and WB2FXK came back to me with a signal that rattled the room.

Although I get signal reports (quite often at the 579 level), there's not many that reach the 599 range....so, Jack in Horseheads, NY was a surprise. At first, I had to think about telling him I was QRP but sooner or later, in every QSO, the power level becomes a question.

I usually send the rig, power, and antenna, on the second exchange, and he was amazed that I was using 5 watts and an indoor antenna. (Of course, Jack had a really good antenna-- which has a lot to do with a good report--and he was using about 75 watts from near Elmira, NY.

If I'm not mistaken, Elmira (used to be and maybe still is) the home of the Schweizer Sailplane Company. I've flown in the SGS 2-33, a few times. It's a close to being a bird as you can ever be....

The world "sailplane distance record" used to be held by a pilot that flew the Allegheny Mountains from near Pittsburgh PA, and a place in Tennessee, and back....... in the same day! I've watched a few fly over from a lookout tower near Peters Mountain in WV. Think about that for a minute....that's a LONG was to fly in a plane without an engine!

If you've never been in the sky in one of these, try this place. Harris Hill Soaring Center, Elmira, NY 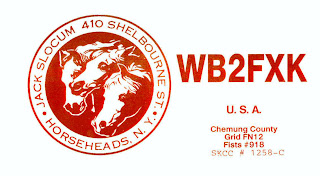 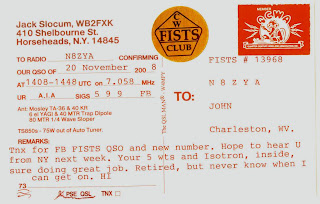