Run for the Bacon 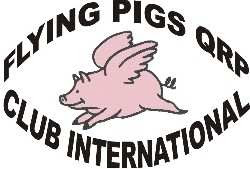 I got a kick out of the Flying Pigs "Run for the Bacon" contest last night. It was my first event, with this club, and I actually worked a few stations (QRP) at 5 watts. I don't do real well with these type of events because of my indoor antenna and "standard filtering" on my Icom 703 QRP rig. I can get the distance....(last night it was about 1,000 miles into Texas) but unless the other station is "off frequency" just a bit, It's VERY difficult to distinguish "piglets" from one another.

My first contact was W5RCP in Putnam, Texas and he was VERY weak (his RST 229). I worked him at 0218z (18 minutes after the start of the Bacon Run). He actually returned my call, when I sent out CQFP from 7044 Mhz on the 40 meter band. Before I changed freq's to the 80 meter band, I also heard W5TA in Round Rock, Texas but couldn't get him to hear me.

Last night, the 40 meter band was VERY long again! (since I didn't hear anything between here in West Virginia and Texas). I've found this to be the case the last several days now with the solar flux at 68.

I managed to work WA0TCO in Edina, MN at about 0309z and was also hearing (among other squealing pigs) two stations in Connecticut (KG1W and K1EV) and another (N4FI) in Norfolk, Va.

One of GREAT things about these type of (QRP) clubs (and something I'm sure the casual reader on this blog doesn't recognize) is these stations, are ALL using 5 watts, or less, of power to communicate with each other.

It's often been said "give me an acre of Aluminium and a Kilowatt, and I'll work the world". How true.....but QRP x QRP is SO satisfying.... It's not the money and equipment that creates the fun, it's the fun of communication with simple rigs and simple antenna's.

Some people actually call it "skill".....I think so too!

The Flying Pigs Web Site can be viewed here: