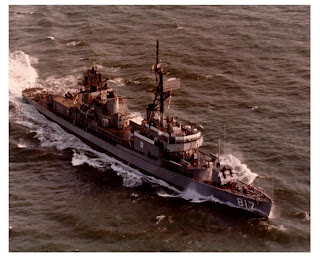 This morning, I deviated from the norm, (I actually used the "SSB" microphone on the radio) and was surprised that I could "check in" with the " Navy Amateur Radio Club". I'm a member of this group because, (how could you guess) I was a former "Signalman" on a Navy Destroyer back in the late 60's. (the USS Corry DD-817)
Their Web Site is here: USS Corry DD 817 Association
Actually, I was a Boatswains Mate, while a member of the Tonkin Gulf Yacht Club, but near the end of my tour in Vietnam, I re-discovered my Morse Code skills and transferred to the signal bridge. I was helping the Quartermasters, with their daily navigation duties, and could read the "slow code" being sent back and forth, between our ships, to verify our latitude and longitude readings on the nautical maps we used at the time.
This morning, the band was again very long, and although the net control station (N4USN) wasn't able to hear me, K4GWG was able to relay my "weather report" and a few details to the net control station.
I was amazed Larry (K4GWG) could hear me from Tennessee this morning. (I've been very lax on "check-ins" because of my QRP power and poor band conditions). A lot of these guys are "down-south" or "up north" towards the Great Lakes. It's hard to work them with 10 watts and an indoor antenna. The solar flux this morning is 68 again...it doesn't get much worse than this as far as radio is concerned.
But to make the QSO more memorial, Larry actually remembered my name, QTH, and QRP status here in Charleston, WV! (I don't think they get a lot of "QRP" stations checking into the net, so when one does...it makes the news).
There's a special bond between "Veterans" and I enjoy checking in with everyone. I'm hoping the winter months will continue to improve the bands and I'll be able to do more of this....
There are many memories I'll only discuss with "Vietnam Veterans".....if you haven't "been there", it's no use trying to get others to understand. I know that may not make a lot of sense to some people but it's futile to waste time trying to persuade people that "haven't been there" the complexities of the Tonkin Gulf shoreline and rivers.
I'm very proud of my service to my country and the sacrifices of my former shipmates. I have two honorable discharges (one from the Navy and one from the Air Force). Yes....it's much too long a story for this blog.
This group is a nice platform to remember those who served on the high seas and coastal shorelines. It was nice listening to the conversations this morning!
My member number is 720.
Posted by Jspiker at 8:15 AM