QRP in the Dark 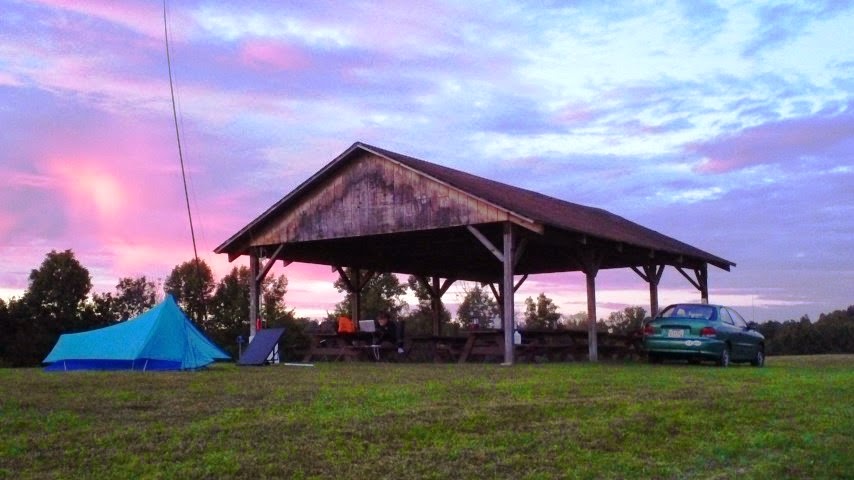 On Sept. 24, 2014, our NAQCC WV Chapter club member Steve Ashcraft (KC4URI) and I met near Grantsville, WV for some quality radio and star gazing time. Steve knew this place because he's been here to star gaze with a local Amateur Astronomy Club. This site is known as the "darkest" place in West Virginia for good reasons. It's isolated and located nearly the "center" of the state. The Calhoun County Park was once a golf course. The grounds are still neatly trimmed. This particular spot, at the highest knoll in the area, was the perfect place to set up an Inverted Vee cut for 40-20- and 30 meters. Steve's 30 foot fiberglass pole worked nicely from here. 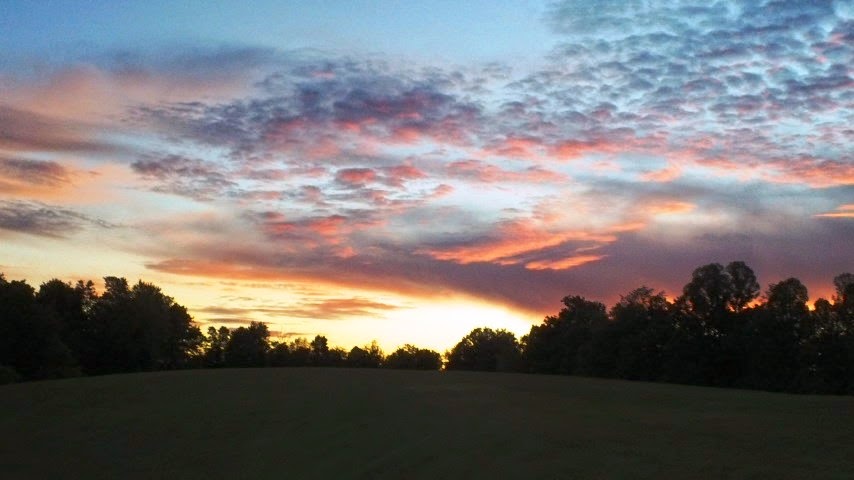 It's been many years since I've camped like this, and I was apprehensive about sleeping on the ground in a small tent. I'm happy to say I survived the night, with no fatal aches and pains, but I'm sure it was amusing as I crawled out of the tent the next morning. It would have made a good video with all the snap, pop, and crackling of bones in the lower back. 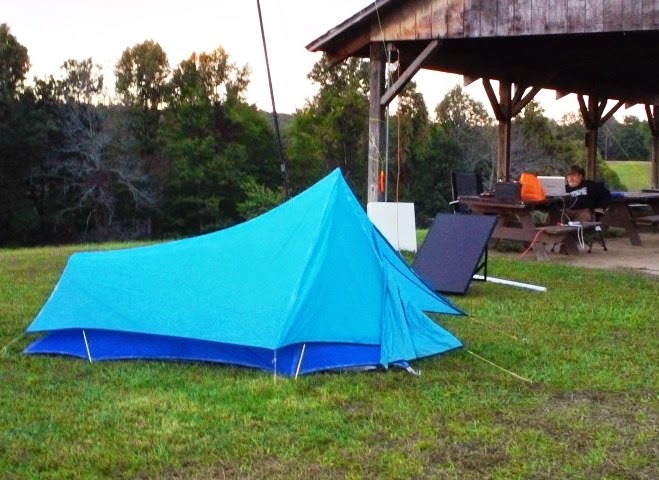 After the sun set over the horizon, we saw millions of stars. The Milky Way was visible from horizon to horizon. The sky was so dense that I could only recognize Scorpio, and Sagittarius low on the horizon. The Big Dipper was there but the top part of the sky towards the North star was a mass of galaxies. Looking at this dark sky is a humbling experience when one realizes we're on such a small planet in the midst of such a large universe. 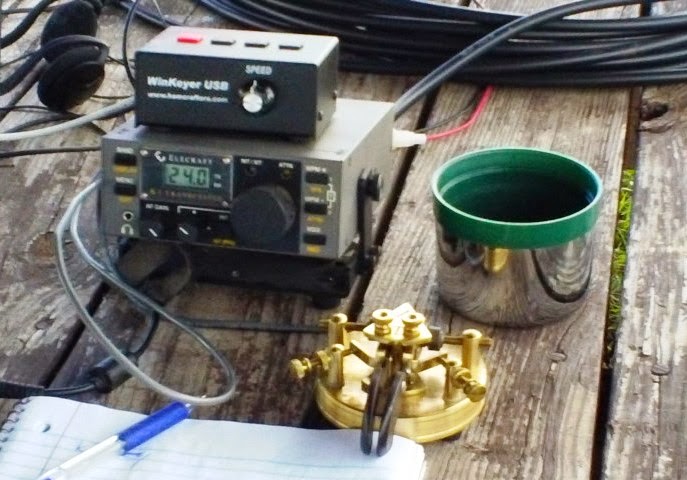 Steve built this little Elecraft K1 and put an antenna tuner and extra filters it.  He also built the variable speed keyer. I was impressed with both those features; especially the filters. That's also a beautiful brass K4QU "March" Iambic paddle. Steve also brought a solar panel and a large deep cycle battery. We could have literally ran this rig for days under these circumstances.

While Steve cooked dinner with a little butane stove; this fellow was my first contact,

For those of us in the NAQCC Club, I'm sure you recognize Paul Huff. (N8XMS) Paul had just set up on the patio of his daughters home in Ann Arbor Michigan and transmitted his first CQ. 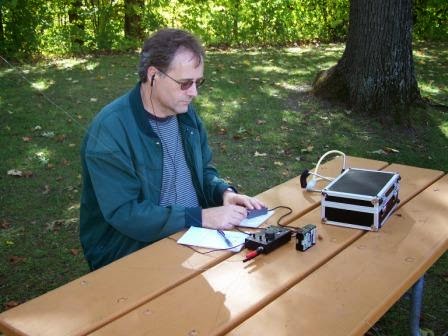 Making my first contact with Paul, on his first CQ, with another portable QRP station, and the leader of the NAQCC club was a special treat for me.

His daughters home is in the country near Ann Arbor, Michigan. Paul was using his KX1 running about 3 watts. He had a wire tossed up in a tree and a counterpoise on the ground.

As the skies got darker, I soon worked club member W3ZMN in Bethlehem, Pennsylvania.

We were getting contacts at distances around 300-400 miles at the time. The stars continued to mesmerize us. The call of a whip-poor-will was near and the sound of a hooting owl, exchanging greetings, echoed around the fields. 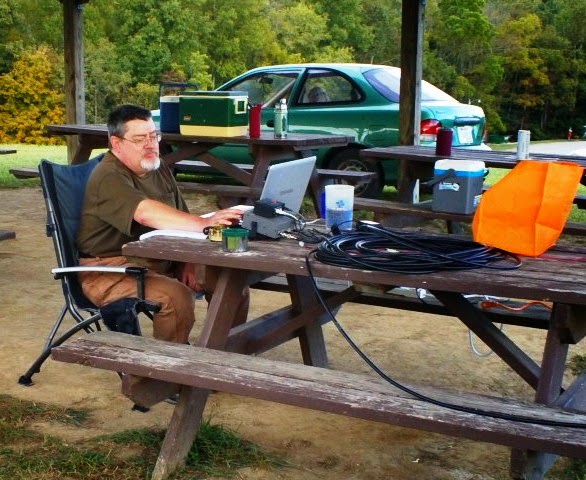 Steve took the key and soon worked club member K8FAC in Youngstown Ohio. The temperature was dropping by now and the air was becoming crisp and clean as I took the key once more.

The next QSO was eerie as I talked to W8HOG in Lynchburg, Ohio. Jerry and I have talked several times previously. He just happened to be looking at my bio on the QRZ site. My electronic QSL card pictures me sitting on the back porch of a cabin with my 1970 EKO acoustical guitar. His daughter wants to learn to play the guitar and I made suggestions about what to buy for the "first guitar".

I talk to KG9HV in Lafayette, Indiana on a fairly regular schedule, and I had told John earlier about our upcoming camping trip to the mountains. Our last QSO, a few days earlier, was on 30 meters. I made a promise to use that frequency when I went on this trip. Sure enough, when I sent my call out he was there on the first attempt. 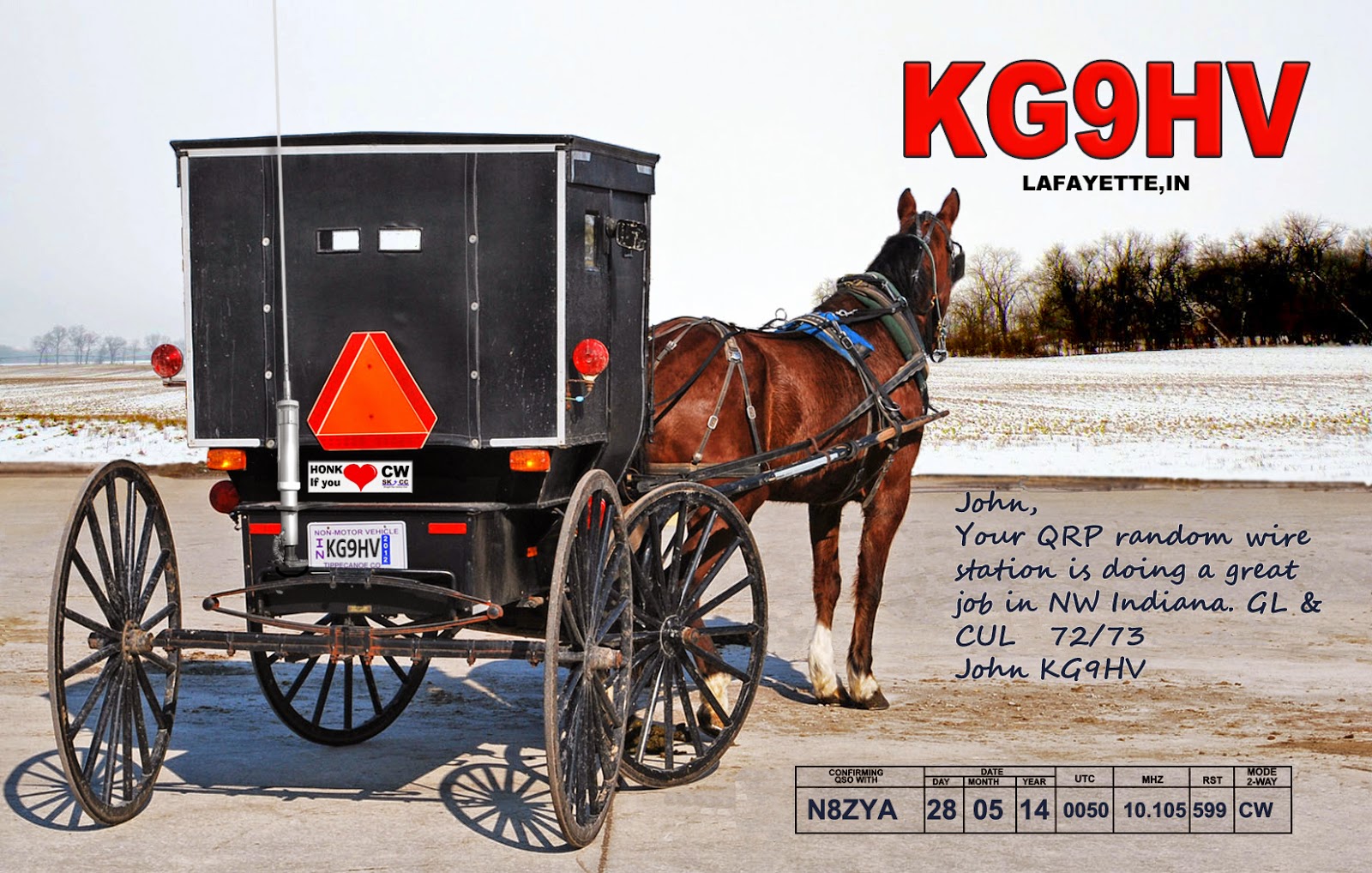 After a nice chat, he promised to shift back to 40 meters latter during the night. As the sky turned nearly pitch black, both Steve and myself had nice conversations with him for the second time.

Steve worked W8KM in Parma Indiana shortly afterwards and just before pulling the plug for the night, I worked WB7PNC in Metropolis, Illinois. Bill was astounded with a nearly 599 signal to him. 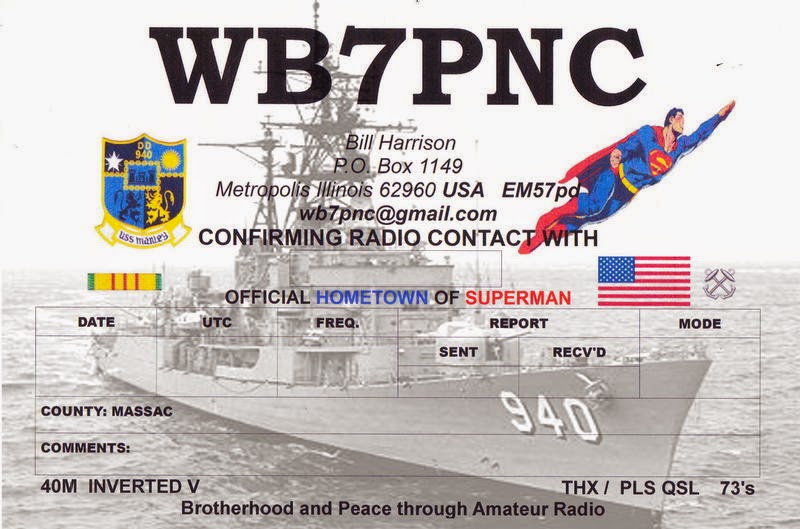 I'm also a Navy veteran, and a former destroyer sailor.

This was a great trip, and we plan to do another "radio camping excursion" soon. We're looking for another in mid October just before the snow starts to fall. We're thinking about a campsite near Elkins WV which is above 3,000 feet. It's dark there too, so should be little electrical noise and a good radio transmission spot.

This was a fun trip, and I'm happy to say that I now have confidence in my camping skills once more. My old bones wont tolerate carrying anything of weight on my back, but the car can carry it all for me. As many of those we spoke to on the this trip sat inside a stuffy room, our CW transmissions from the great outdoors, under the stars, with a small QRP radio was exhilarating. You can only do this kind of radio by using small portable gear. It's a hoot! 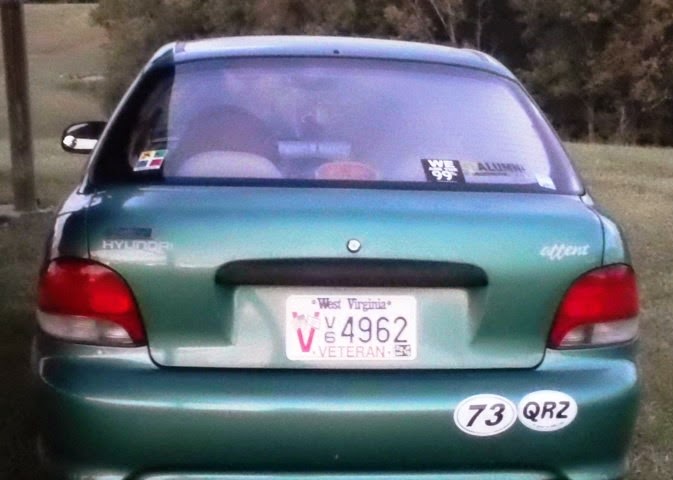