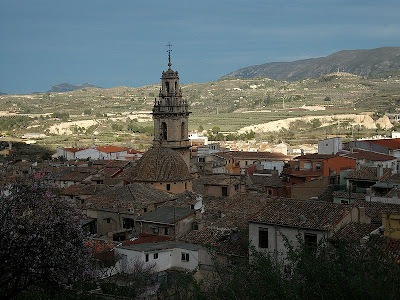 My DX contact this morning was on the very far side of Spain at 4,228 miles. It was another "handshake" but Salva (EA5DWS) was using a paddle and congratulated me on my 3 watt QRP signal. We exchanged names, RST, and QTH's.

I wasn't hearing much on the bands this morning despite good propagation. Salva was "out in the open" on the 17 meter band. I worked him "just because I could". Countries in eastern Europe are fairly easy for me to work. Spain is pretty common "catch" for me. This station is my 20th from Spain in the log book. 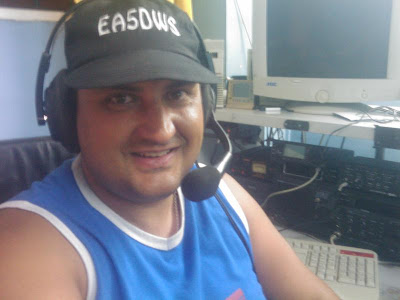 
Here's a nice Waltz done by a couple at one of our states finest Hotels a few years ago. 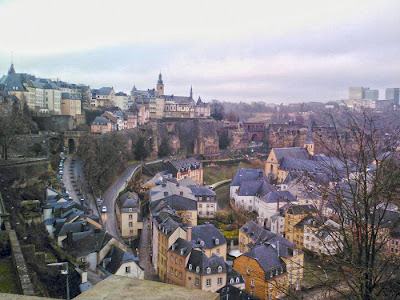 It was difficult to get a good grip on LX1NO in Luxembourg this morning but after a few repetitions (on my part) we completed the "handshake" and moved onward looking for other stations. I worked this station on the 17 meter band.  Luxembourg is one of the most prosperous and developed countries in the world. It has an advanced economy and one of the worlds highest per capita incomes. There's a lot of banks here.....

Unlike most European stations, I've only worked this country one time previously.

Switching over to 30 meters, I worked two nice QRP stations in the US. Bob (KB3ENU) was in Galena Maryland and using a K-1 @ 5W into a dipole. Soon afterwards I worked AK4JA in Newman Georgia. He was using a Yeasu 817 @ 5W into a vertical dipole.

There's light snow on the ground here this morning. I needed to get the dog outside for his morning walk. The temperature was 26 degrees (f), so he wore his winter coat. 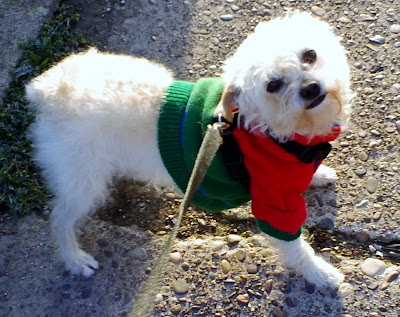 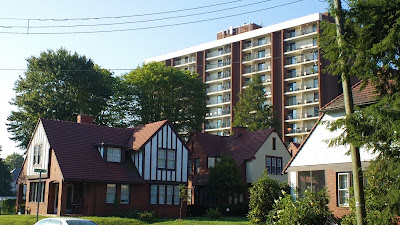 Another year has passed with continued enthusiasm for my favorite hobby. As we approach the new year, I always take a few minutes to survey my log book to see where I've been and where I may be going in the upcoming year.

I made more contacts this year than the previous one. This year I made 467 contacts with a variety of different stations. I can almost count on my fingers and toes the number of stations I've worked on SSB; the vast majority were CW (99.9%) contacts.

I continue to be motivated by Morse Code and worked 111 DX Stations this year. I know that's not a lot of contacts "across the pond" for many radio operators but I'm happy with my little station; despite its challenging location. Looking back at the"total log book" since retirement; I see a total of 1,697 contacts with 376 being contacts with other QRP operators.Considering my indoor antennas; I have no complaints.

I've changed my station a bit since last year and added a random wire and a new key. I'm using an external tuner and now use an old laptop computer for DX spotting on the cluster. I've spent a LOT of time chasing DX this year; but still like a long "chat" above all else.


The entire station sits on a small "aluminum camping table" in front of the bedroom window. 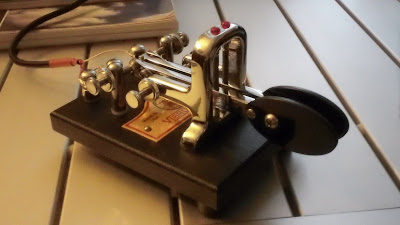 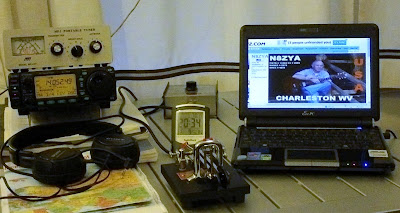 I still cherish the idea of simplicity and strive to keep my station VERY basic. I have NO plans to operate with anything but CW in the upcoming year, although I've been know to jump to SSB for a "special event station". I can still take the entire station down and be in the field in a matter of minutes.

I love this hobby which encourages me to view other parts of the world, and the lives of the radio operators who live in distant lands. I still think it's the best hobby in the world!
Posted by Jspiker at 8:25 AM 8 comments:

Summersville Lighthouse in the Mountains 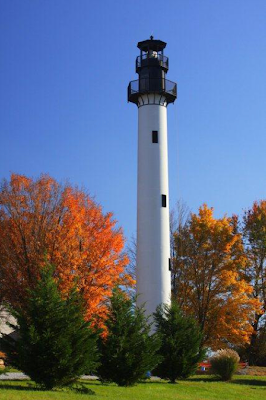 "West Virginia has a brand new "lighthouse" in the mountains. The Summersville Lake Lighthouse was erected in Mount Nebo, West Virginia on October 17th, 2012. Standing 104 feet tall with a top elevation of 2,164 feet above sea level, the 77,000 lb.structure has a cylindrical tower constructed entirely of ½ inch thick steel. With a base diameter of 12 feet receding to 8 feet at the top, visitors will be able to climb 122 steps to reach a 360 degree gallery deck offering unparalleled views of Summersville Lake and the Gauley River National Recreation Area. The second tier lamp room houses a fully restored 36,000 lumens rotational beacon complete with a double bulls eye Fresnel lens capable of projecting a beam a distance of over 30 miles".

The official dedication and Lighting of the Summersville Lake Lighthouse  will be held on West Virginia Day, June 20th, 2013. 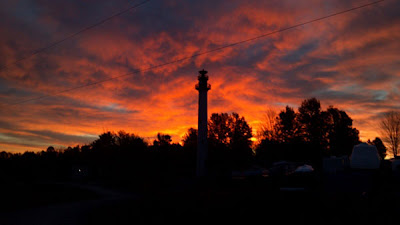 I've operated QRP radio from many different places in the last twenty years but I think this location is going to be unique. You won't find many lighthouses at 2164 feet elevation and 350 miles inland from the east coast.

Actually, this might be the only "lighthouse" of this type anywhere in the world. Hihi

When I first read of this new place near the New River Gorge, I thought that I had to share it with all the QRP operators on the blog. One of the really great joys of operating a QRP station is the ability to set up and operate a station in the field. You just can't do that with a rig that pulls twenty amps. It can only be done with radios operating very low power. (QRP) I thought this place (about an hour and a half drive from me) would be the perfect place to set up a table and chair, put an antenna is the trees, and contact as many stations as possible....just for fun! There's a great campground here with all the amenities anyone could dream.

Be sure to click on this link: Summersville Lake Lighthouse to learn more about this lighthouse. It's an interesting read and well worth the time; especially if you're a QRP operator who likes to transmit from unusual places.

The images and quotes used in this entry are with the permission of the owners and operators of the Summersville Lake Retreat. I've no connection with them other than an interested camper who hopes to transmit from there this summer. I'm grateful they've allowed me to share this unusual place with my readers.

A Window into Europe 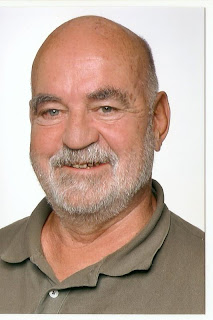 This morning I stumbled onto a nice opening towards Europe on the 17 Meter band. As I'm sure anyone working DX knows, the majority of these contacts are usually "handshakes", but occasionally you meet someone who really goes out of their way to, not only make a contact, but continue with a nice QSO. Such was case from this station in Seevetal, Germany today.

There were a LOT of stations in this mornings "window". I heard DL2SC calling but only copied the DK when I first responded. It took me several attempts to put his numbers and letters together. As most of my readers know, I don't have "filters" in my QRP rig and the "buzz" was deafening as I tried to copy him next to a pile up.

Hartmut (DK2SC) deserves a "special recognition" for leading me on a trail of dot's, for what seemed like forever, as we shifted from one segment of the band to another. We finally landed in the "clear" and continued a "short chat" of about 10 minutes. At the very best, I was no more than 229 and how he managed to hear me during the "chase" to a clear frequency, I will always be amazed! He is an exceptional operator.... 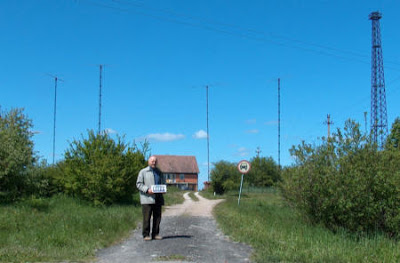 I also managed to work some more interesting stations like this one in Lithuania. Jonas (CY5A) was also talkative. We exchanged the basics but soon moved onward.

I thought for sure I was hearing a long sought after contact with my friend Dick (F8WBD) in France but it turned out to be F8GGD, in Cognac. Nice spirits by the way..... 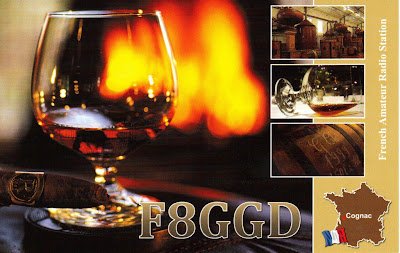 Last, but not least, I made a contact with G3HGE in Suffolk, England. Tom is the proud owner of "TW Radio" and produces a mighty fine looking magnetic key! Tom sent me an e-mail congratulation me on my 3 watt QRP signal. Tom has a great web site, where there are several videos of this great key. 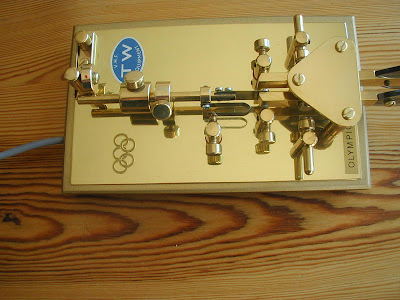 You should take the time to google "TW Radio" as the site is full of information about Tom, his early radio days, and the history of his company. It's a great read....

I'm sure he was using this key in the QSO this morning.
Posted by Jspiker at 11:05 AM 4 comments: 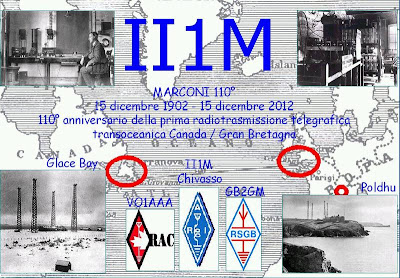 I felt fortunate to catch this "Special Event Station" (II1M) celebrating the "first transatlantic radio transmission" by Marconi in 1902 this morning. They were transmitting CW from Chivasso Italy, and putting a fantastic signal into West Virginia from 4,394 miles distance. It was an easy catch and a memorial one. I found this station on the 17 meter band 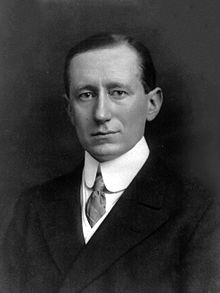 Volumes have been written about him and well worth a good read at any time. Marconi was born in Bologna Italy and thanks to this great pioneer, our hobby has been well served. Even today, there has not been a better form of communications, decipherable with the human ear, ever surpassed. Our CW radio mode is forever debited to him.
Posted by Jspiker at 8:50 AM 6 comments: 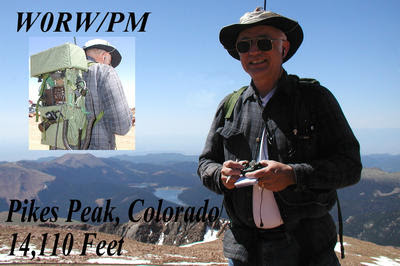 I was hearing a very weak station on 20 meters this afternoon. I thought it was a familiar call. It turned out to be Paul (W0RW/PM) who was operating QRP/PM  from somewhere near Colorado Springs Colorado. That's a straight line distance of 1250 miles from here. I could barely pull him out of the noise but managed to copy the essentials on the high spots. I had to repeat my name but we made a good contact.

I've worked Paul several times in the past and always get a kick out of his "backpack" mode of operation. He uses a VERY interesting radio (google this one) and also has an interesting astronomy hobby.

To me, this is one of the ultimate modes of radio. In essence, a HF radio used while walking around on a hike! I've always admired any type of "portable operator", but especially those using QRP power. I've sent Paul and e-mail, an E-QSL card, and spotted him on the "QRP Spots" reflector. I saw other spots but I seemed to be the farthest distance.

I'm not sure of his "exact" location. Perhaps his card will tell me for sure. 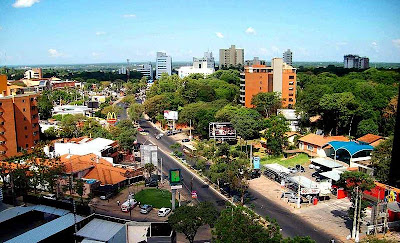 I finally found a few moments of free time yesterday evening and found ZP6CW in Caacupe, Paraguay on the 17 meter band. At a distance of 4,678 miles, I thought it was a good catch, especially since it was a new DX entity for me. (#61)

South America is one area where I have the opportunity for new contacts. I find my operating mode is revolving around DX clusters. I've printed out the ARRL DX entity list and immediately scan them for new countries. Radio is a lot like fishing to me. You never know what you're going to catch until you throw your line in the water. I was happy with this catch....
Posted by Jspiker at 7:01 AM 3 comments: