I'm working a bunch of local stations with the little Vibroplex Code Mite Key. It's taking some patience to keep my speed down, and keep correct spacing at this speed, but also quite satisfying to hear slow code again and carry on actual conversations with hams.

I've been hanging around the 7.055 MHz SKCC frequency.

I was surprised to work a new station in Cuba last night. I've made at least twenty contacts on this island previously, but this was my first "CL" contact. I was happy to work CL8CF in Baracoa, Guantanamo Cuba.  The previous contacts have always been on 20-17- or 30 meters. I worked this station on 40 meters!


Apparently, this is a new band which is open to a new generation of hams in Cuba and they're limited to 10 watts of power.


I listen to Arnie Coro (CO2KK) on the Short Wave bands and his "DX'ers" program in the winter months. A few years ago, I came close to working him and wrote him about the contact. He mentioned it on his SWL program and I have a recording of it on a cassette tape, but it's a very poor quality. Although I could hear him, he couldn't copy my entire call sign.

I like the percussion rhythms of Cuban music and consider all music to be a "universal language". I chose the above video because of the music.

I can't find much information on the web about Ham Radio in Cuba; but found the above video and wanted to share it with my readers. I no longer find the call signs of the previous Cubans stations I've worked on the normal data bases. I assume those stations are tightly controlled and difficult to retain. The most common call I now hear from there is CO8LY. 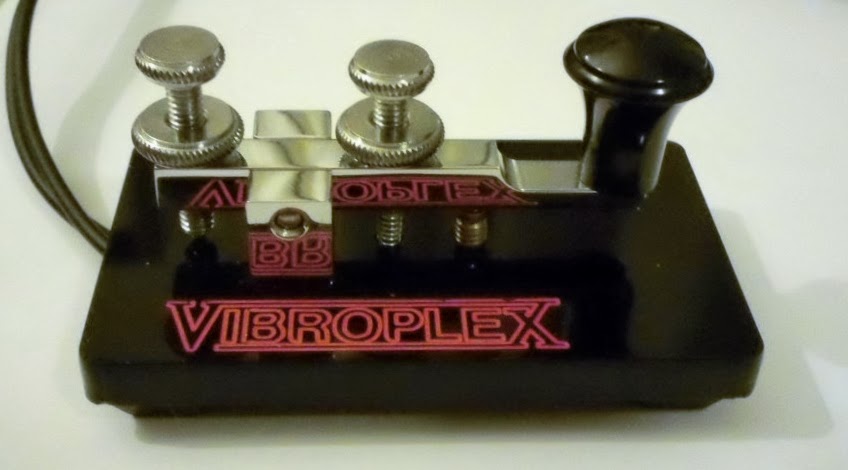 The new small "key" is working well. I'll be hanging around the slower portions of the bands and enjoying QSO's until the DX bug returns. I'm glad I found this key. I'll use it in the field because it's so small and lightweight. Despite it's small size, it's functional. 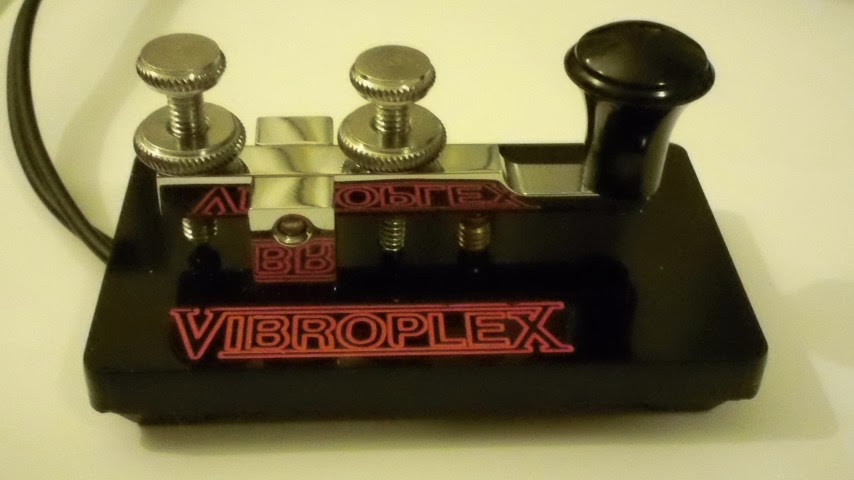 I enjoyed the drive to see the K-3 station of Art Ellis (W8PBO) in Ravenswood WV. I also enjoyed talking to Eric (AC8LJ) as we drove up the Interstate to Arts home. It was a very enjoyable trip and I was pleasantly surprised with the entire days events.

Art uses the latest Elecraft K-3 K Line gear at this home. A brief demonstration had me hooked with the first note coming from the speakers. I'm very impressed with the "graph" feature on this radio. Being able to visually "see" the signal on the band, and automatically "tuning" the radio to this frequency is VERY useful. With the accompanying "signal strength" displayed on the screen, it would be easy to spot "QRP" signals.

We chuckled when hearing "Bens Best Bent Wire" from a station near Chicago.

I had no idea that Art (W8PBO) was a collector of many fine, and unusual Morse Code Keys. I plan to return here to take a closer look at them when the water situation returns back to normal in Charleston. This trip was a much needed refreshment from the chemical spill here in the valley.

Although we visited Art to take a look at his fine station, both Eric and I returned to Charleston with one of Arts many keys. I chose the very small Vibroplex Code Mite. Most hams would keep this key just for the collectors value but I had every intention of using it with my QRP station.

I'm not sure how many of these keys were produced but I have # 490 on the table alongside my Iambic paddle. I'll use it for SKCC and slow speed NAQCC events. 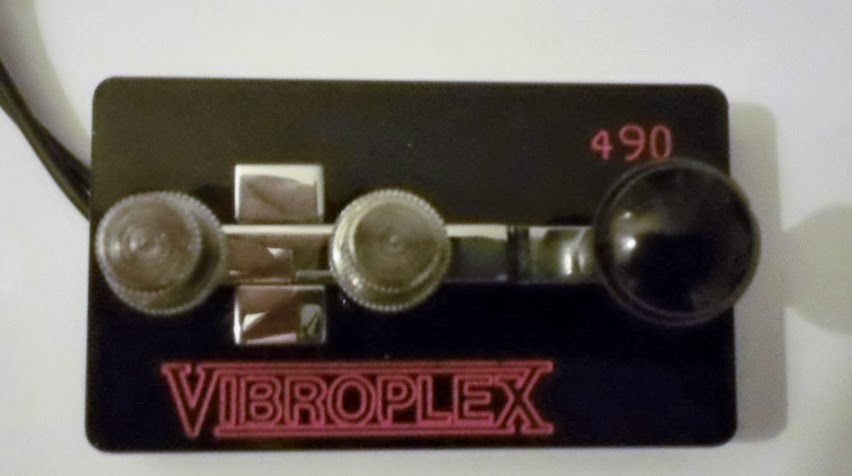 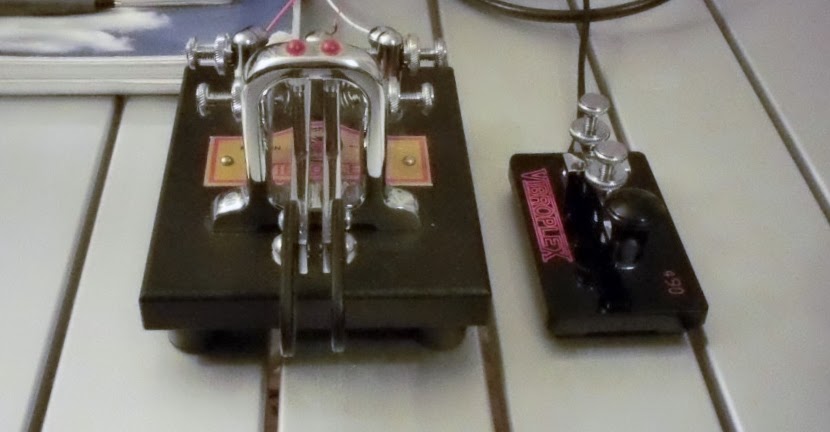 Every new day I spend on the CW portion of the bands makes me appreciate the development of Morse Code equipment. We've certainly advanced from the original "straight key" days of early radio. 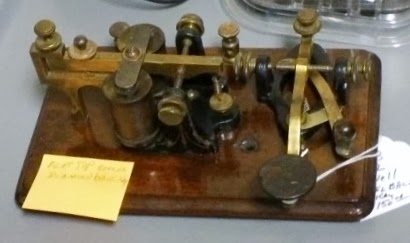 I'm looking forward to another visit to Art's radio shack. I had no idea there was such a fine display of both a good CW station and a collection of great keys in West Virginia. I'm overjoyed to find the small Code Mite key and Eric came home with a "Sideswiper" which has a very distinctive sound.

Art will be at the Dayton Hamfest in March; I'll be looking forward to seeing him there. 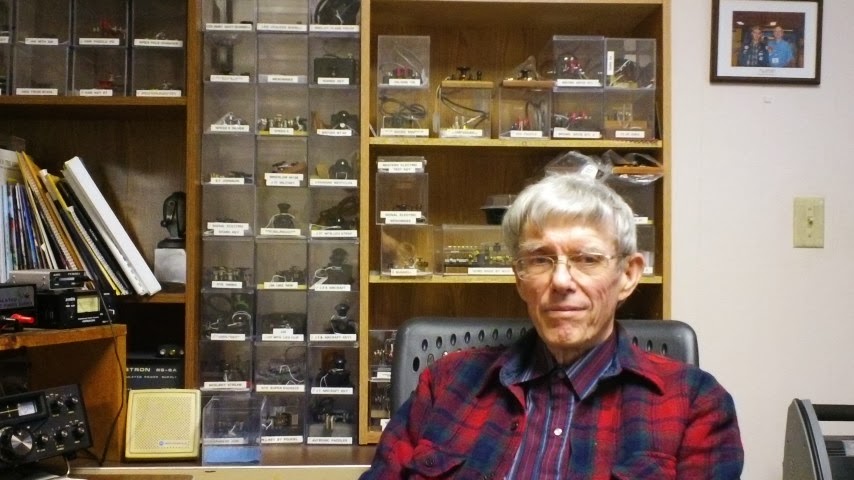 Art and his wife were perfect hosts to our visit. His wife served us coffee, tea, and cookies before we left for home. They were both teachers before retirement. You won't find finer folks anywhere in this state. They were both a real joy to meet.
Posted by Jspiker at 8:58 AM 5 comments: 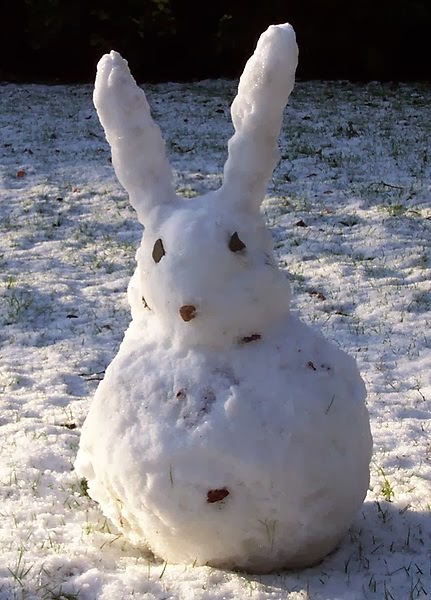 It was another very cold morning when I arose today with the temperature around -17 (C) . It actually dropped down to -20 (C)   last night. I had no desire to get outdoors for anything; so my morning routine was much like yesterday.

My radio contacts this morning were much like yesterday too. The contacts were difficult today but I still managed to work another five DX stations.

Although I've worked 12 stations in Denmark now, OZ1AAR, on 12 meters, was my first "OZ1" Station in that country.

Also like yesterday, I moved along the bands as they drifted, and soon worked KP4ED, in Puerto Rico, on 15 meters. He was searching for SKCC members and we exchanged club numbers. His is # 6589 and mine is #4525. 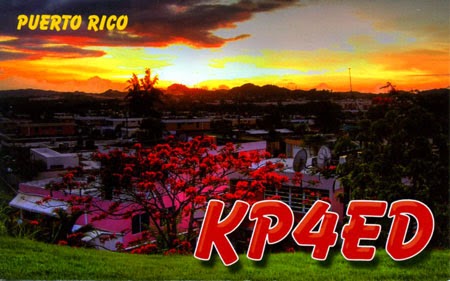 I found 17 meters open this morning and worked the rest of my stations on this band.

Steve (G3VMW) was in England. He is my 8th G3 station now among 21 contacts into that country. I worked a German station (DL1DGS) who was the 4th "DL1" station of 47 contacts now in that country. Last but not least, I worked the Italian station IK3VUT for the 4th time now. He was the 39th contact I've worked in Italy. 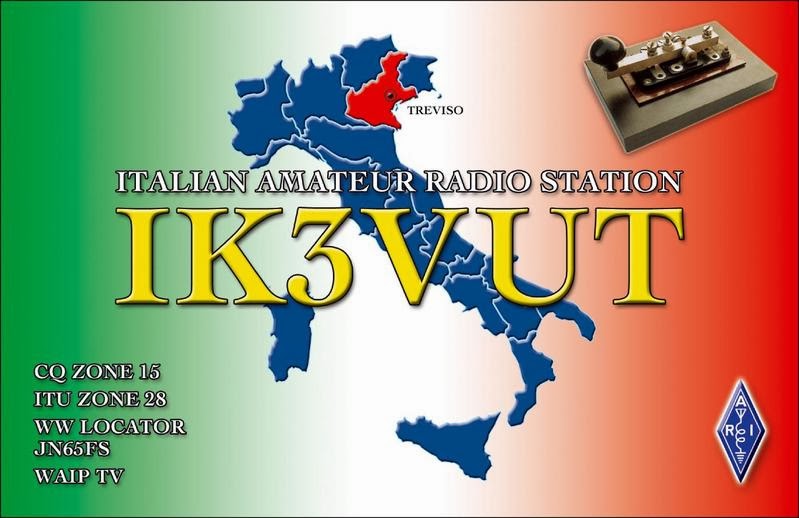 Tomorrow morning our WV Chapter of the NAQCC Club will have breakfast in Charleston at 8:30 am so I will "miss the window" for most DX stations. I'll look forward to working some local radio people.

I made a comment in yesterdays post about being "Back in the Saddle Again" which made me think of a neat QRP station I worked several days ago.

This  QRP station in the state of Utah (K7JHM) fit's that description perfectly! 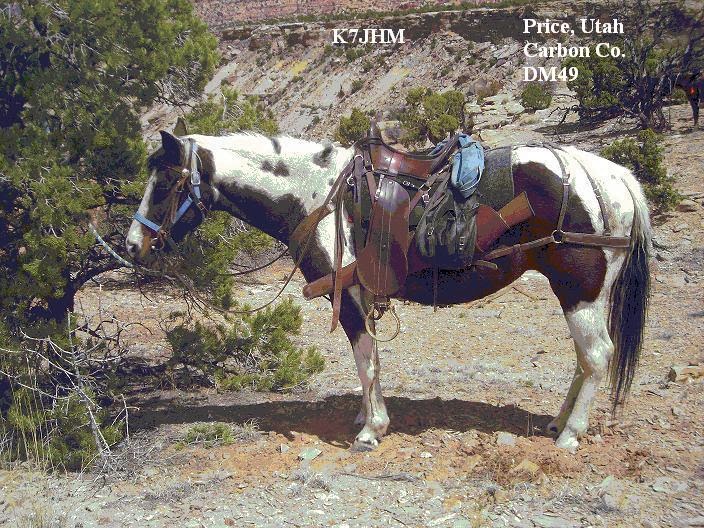 Back in the Saddle Again

It's always a pleasure to work Bert (F6HKA) in France but especially so this morning when I heard the familiar strong signal here on the east coast. He always has a 599 signal. This morning I worked him on 10 meters. I've been very busy since the beginning of the new year and Bert was my first DX contact for the 2014  log book. He was sending K3Y/EU but I knew exactly who he was when I hear him. We've worked 9 different times now and he always takes a few extra moments to say hello and how are you? He's a true gentleman and he enjoys working QRP stations.

I was skipping across the bands now and I worked the next station who was in Madrid and on 12 meters. This contact into Spain was much more difficult but I finally worked EC4DEX after several attempts. 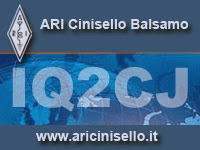 I now dropped down to 15 meters and caught this station (IQ2CJ) in Northern Italy. It was also difficult to copy but we finally managed to exchange call signs and move onward to other stations. I was hearing a station in Ireland but couldn't work him. 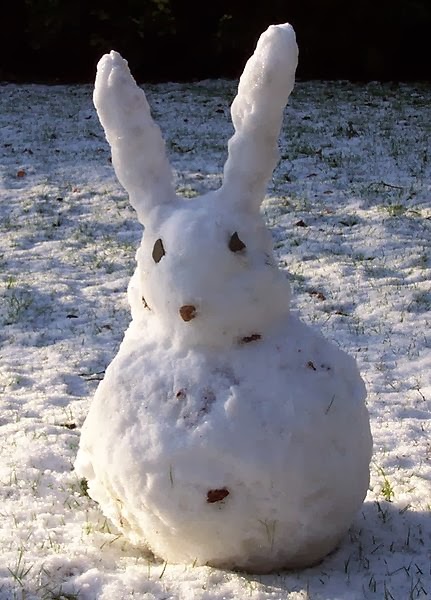 I don't plan to go outdoors today because of the windy cold weather.

As I continued to travel towards the lower bands; I stopped on the 30 meter band and threw my call out on the QRP frequencies. I was answered by Hal (KA4SDU) in nearby Louisville Kentucky. He lives next to the Ohio River and enjoys watching the barge traffic as it moves downstream. We both being Navy Veterans, we had a delightful talk about several different things.

The month of December brought NO outside activity for the WV Chapter of the NAQCC Club and I doubt for the next couple of months. I don't want to end up like that frozen rabbit in the upper picture.

Our monthly club breakfast, at the Charleston downtown restaurant, is this coming Wednesday. A few days later Eric (AC8LJ) will drive to a fellow CW operators home to see a variety of different keys. I'm assuming the weather will be a little warmer at that time.

Don't want to end up like that frozen rabbit...... 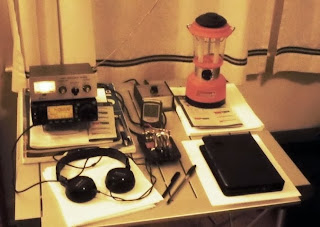 How has the radio year 2013 been to you? Have you made additions to your shack? Did Santa bring you unexpected toys this year?

The year 2013 has been good to me with the beginning of the new WV Chapter (October) and a lot more activity with my QRP station. I'm totaling up my contacts for the year and am amazed at some of the statistics.

Firstly, I added a new Vibroplex Standard Iambic Paddle to the shack this year which increased my speed a bit. I also have a magnetic action Vibroplex Iambic Paddle which I like very much. I've found them both to be excellent keys, and maybe I'm just getting old and my eyes are seeing things from a different perspective, but I'm proud to say they're made in the USA.  I can now comfortably work many more of those long distance DX stations.

I also added a 50 ft indoor random wire antenna which I can tune on all bands. And speaking of DX stations, I worked a DX station for 146 continuous days before missing a day due to bad propagation conditions. The DX contacts picked up again soon afterwards, and as I look at the current log book, I see 426 DX contacts for this year.

Considering that I worked a total of 723 stations in 2013, the percentage turns out to be almost 60% in the DX category. Working DX has become an obsession for me although I still enjoy a good chat with my fellow NAQCC members on any band.

I made some great contacts this year. I've worked both Alaska and Hawaii, two stations in Japan,Nigeria; and my longest distant station yet with a contact in Oman. (7,429 miles)

Although the month of December has been both too cold, and too busy, to spend much time operating outside on the radio; I've enjoyed meeting new members, as well as seeing old friends, and operating outdoors when the weather is co-operative.

I doubt January and February will be an active "field" time for the West Virginia Chapter of the NAQCC Club but we still continue to meet on the second Wednesday every month for breakfast and will continue our weekly nets on Tuesday nights on 40 or 80 meters.

I find it absolutely amazing, to accomplish so much, with so little, in the QRP realm. I can work distant stations regularly with only a few watts and a simple wire antenna.

I know you can do the same thing with your QRP station. Morse code only requires a few watts to work the entire world.