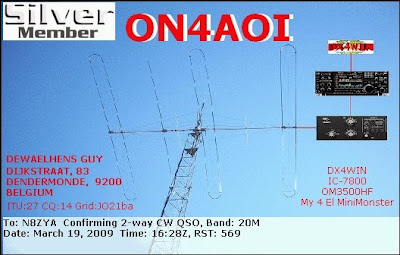 I received some WELCOME news from ON4AOI in Belgium today.

Several weeks ago, while listening to an "unusual frequency" on 20 meters, I heard him calling CQCQ LOTW USERS, and after not hearing a response from anyone, I thought I'd give it a try. He was loud and clear and I couldn't resist the temptation to work a little DX, if given the opportunity.

Although I followed up with an e-mail (and he responded), I had almost given up on getting a "card" from him. (I suggested a confirmation on E-QSL) since he was a member.

I'm sure he uploaded his contacts on LOTW but had forgotten my QRP contact since I'm not familiar with that program.

I was on top of the world today when I opened my E-QSL "Incoming QSL's" and saw ON4AOI in the log book. We're both "authenticated" on E-QSL.

Actually, (if I choose to do so) E-QSL will "print and mail" this card to me on NICE paper stock for a small fee. I don't (for the life of me) understand why "everyone" doesn't use this service.

With current postage rates...it's silly not to do so.
Posted by Jspiker at 5:55 PM 1 comment:

I was ecstatic to work a dozen stations in the NAQCC sprint last night. It was my best effort to date, with the solar flux at only 72. It seemed to be the magic number for me (72) because the band was "short". It enable me to work 9 different states.
By no means a "quality score" (you have to remember I'm using an indoor antenna) but I got a real "high" working this contest. My best so far has been about 7 QSO's and if I had thought, I could have worked the same station on three different bands. (Something to think about on the next one)

I was lucky to work K3WWP (# 2 and VP of the club) I now have #1 and #2 in the log.
I was sure glad to get a confirming e-mail this morning on a "portable-mobile" station I worked last night. N7RVD is traveling around the country in his RV and I thought I had the state incorrect on the log last night. His home QTH is Washington. I copied VA and assumed it was an error.
This was a real joy for me and a great opportunity to add a "dozen" QRP stations to the log book.
This afternoon I will attempt a 2,000 mile 2 watt contact in Nevada on 20 meters.
I haven't been making a lot of progress on the 1,000 mile award ...my best has been K1IQI in Massachusetts. I worked him a few days ago with 2 watts on 40 meters. (500 miles)
The Sprint results are here:
NAQCC May 2009 Sprint

Posted by Jspiker at 8:37 AM No comments:

I'm an even tempered person and slow to anger but it makes me furious to hear a "BIG" station "tuning up" on the 7040 frequency. Don't they have a clue?

I was working one of the most unusual call signs I've ever heard (and a new one for me) this evening when someone (aka LID) started "tuning up" right on top of us. And without any notice what so ever. No QRL...no CQCQ, no IMI...nothing.

I wasn't the only one disgusted with this display of arrogance and ignorance, and at least two other stations, that I could hear, broke into a LID LID LID repetition towards this individual. It gave me the feeling that he MUST have been running (at least) 100 watts and doing this deliberately. The signal here in WV was 20+ the entire time.

I don't know who you were, but come on....a little courtesy goes a long way.

Despite the obstruction, I was able to work AA9AA using a Tuna Tin at 2 watts from Manitowac, Wisconsin. I shifted the center carrier freq a bit and used the "reverse mode" on the 703. Hey.........it worked, I can't explain it, but it worked.

It got through the QRM'er just fine!

ps.....it's now almost half an hour past the initial contact and I can still hear it!
Posted by Jspiker at 6:33 PM No comments:

I did something this weekend that I don't do often. I used the microphone....

Last June, I worked this "monster station" in Calgary (VE6AO) during the "Calgary Stampede", which is a "cowboy" event, that's known all over of world. I have a friend that plays music there. (I'm a guitar and piano player) I heard, and worked them on the "first" try this afternoon, on 14.246.

I also knocked myself out trying to work a "Lighthouse" in upper Maine but my signal was evidently shooting right over him. No matter how many times I tried, I couldn't work AA1KS but it was fun trying.

I also listened to the "Boeing Bears" in Seattle Washington on 14.272. That's stands for Boeing Aircraft Company.

I thought there might be a chance to catch someone at Dayton this weekend, on 80 meters, but haven't heard anything at all. Dayton is just too close, as is Maine, but given the space of nearly 2,000 miles, the west coast is just perfect.

The Calgary station (VE6AO) was broadcasting from the "Calgary DX Club Station".
He had me in the log book from last June and mentioned it to me. They copied my 10 watts at 5x4. They've got a LOT of aluminum in the air!

You should check out their club web site....very impressive!
Posted by Jspiker at 1:00 PM 4 comments:

I'd really like to work a station at a thousand miles or better with a watt! I've come very close several times (at the 5 watt level) but just can't seem to get another 500 miles or so...

Twenty meters is my best chance (although it's possible on 40 meters).

For all those reading the blog regularly, please contact me if you have a "really good pair of ears" ! I'd love to set up a schedule and attempt the "jump" at your leisure.

I can move to the field on a nice day for a 20 meter contact!

I've been a little lax on my blog entries the last few weeks. I have a good excuse...It's because I haven't been near a radio.

I had planned to take the rig with me on our annual trip to the "Outer Banks of North Carolina" but, at the last second, we had car trouble. I didn't want to take a chance on breaking down on the road so I left it at home.

Since we've returned last Saturday, I've been making several contacts into Northeast Canada on 40 meters. This afternoon I decided to tune into the 20 meter CW band and listen for a few minutes.

At 2146z I heard EA6UN in the Balearic Islands of Spain on 14.038 MHz. He was working several stations (which I couldn't hear) and at the right time I answered his CQ as he was finishing his contact. I was surprised he immediately returned my call and we exchanged RST Name and QTH.

Jurek lives on the far side of Spain in the Mediterranean Sea. I "Spotted" him on the QRZ DX Cluster with the hopes others, on the east coast, might work him be able to find him. I was very lucky.

That little 18" Isotron Antenna surprises me sometimes.
Posted by Jspiker at 3:14 PM No comments: