30 Meters on the Hudson River 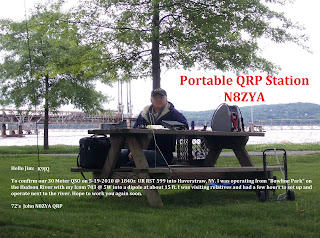 I’ve been near New York City this week to attend a granddaughters graduation ceremony at Suny Albany and I've got into the habit of taking the QRP rig along on trips with the hopes of getting a few hours "free time" to spend on the air. This afternoon I was able to set up my little station at a city park on the Hudson River in the town of Haverstraw NY.
I had originally planned to hang the dipole as an inverted Vee but after pulling the center portion over a low tree limb, it was easy to arrange flat and oriented East and West.
Today’s solar flux was 68 (terrible for 30 meters) but after listening for just a few moments, I found a “special event station” in Italy (IU3AC) pounding out CQ’s and a vast swarm of bees trying to work him. I didn’t waste much time with this because I could tell the band was unstable and I didn’t hear any strong US stations attempting a contact. (Lets face reality, I’m only running 5 watts of power).
Soon afterwards, I heard KA4KSB in New Bern, NC (and was able to briefly work him) but the band shifted and we were not able to continue the QSO.
Another strong signal came from N4QLB in Anniston Alabama but I couldn’t make the contact.
I was beginning to think the band “just wasn’t there” when I heard K9JQ in Chicago Illinois call CQ with a very strong signal. We chatted for several minutes as I explained my operating location on the Hudson River.
I love operating like this and look forward to more of the same as the summer season approaches. I’ll again make up a special card for this contact since Jim has a current e-mail address.
It was really enjoyable to chat with others from this location. It’s a beautiful spot on the river where I can see sail boats and freighters as they enter the channel towards New York City.
This, to me, is what portable radio is all about.
Posted by Jspiker at 5:02 PM 3 comments: 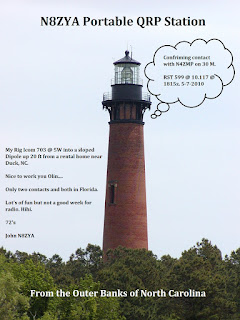 As I've mentioned in earlier posts...while out in the field, I've started sending "special" QSL Cards to those I've worked with my new 30 meter dipole . I've sent a copy of this one to the Pensacola Florida station that I worked from the rental home near Duck North Carolina.
They aren't hard to do and it's a visual memory of the contact for the both of us. This one is created with the "paint program" that comes with the basic Microsoft software.
They can print it or save it to their hard drive.
I prefer to save them on a "memory stick".
The other Florida station didn't have a current e-mail address. 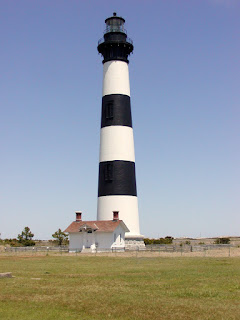 Last week, while at the beach in North Carolina, I couldn't find time (or a good location) for the radio.
It's a two day drive to the coast, and there was a "strong geomagnetic storm" brewing on the bands . To make matters worse, there were a few thunderstorms in the area (lightening and wires don't work well together) and I had a "poor" location to to place a dipole antenna.
During the next week, I was only able to operate once, for a few hours, when I strung the 30 meter dipole from the top balcony railing of a rental home and into a small pine tree. (I hate pine trees because of the sap that seems to cover everything they touch). The antenna was "sloped" significantly towards the South.
But I was able to work two stations in Florida. (N4ZMP and WA2PAY). One was in Pensacola and the other in Saint Augustine.
I usually take my Isotrons but didn't bring them because of the expectations of working more stations on 30 meters with the new dipole. Looking backward now, for portable operations and simplicity, the Isotrons are VERY hard to beat.
I had a good time while at the Outer Banks of North Carolina but it wasn't a good year for radio. It was great to be around family and we enjoyed the long walks along the shore in the morning and evening hours. We also rode our bikes into the little town of Duck several times.
On our first day here, we watched a "humpback whale" for nearly 20 minutes as it slapped its tail and fins on the water. I never expected to see that on the east coast.
For radio next year, it will be back to the Isotrons.
Posted by Jspiker at 6:00 AM No comments: