This morning I mistakingly answered a CQ station which I thought was a Straight Key Century Club member. They were using a familiar format which is used by several clubs. (Call, RST, Name and Number). When I realized I had sent my club number,  from the wrong club,  and the station had no e-mail address posted on the web, the only thing I could do was re-call and admit my mistake. I then sent my 5W and an explanation.

Last year, I participated in this Special Event Contest and had a lot of fun working as many stations as possible in different areas of the country. You can find all the details of this years event from the SKCC link on the right side of this blog.

My old Brunnell straight key is very simple but I love the sound that only comes with this type of key. It was given to me from the estate of a SK who wished to remain antonymous and I cherish it as much as my radio. It's a little over a hundred years old and still functions flawlessly. I've began using this "straight key" almost exclusively. Even in long contests. 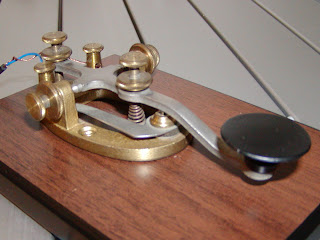 The first station I worked this morning was another QRP station in the state of Maine (K0ZK). We both exchanged 599 reports and I was astounded that he was 661 miles from me and using 5 watts of power. But his "club number" was the most puzzling I've ever heard on the bands.

I listened closely as he sent 1ooNN.....

I haven't, but that's what he sent, and I assume the only purpose was to play with other people's heads. (I don't mean this as nonconstructive criticism). And after thinking about it for a minute or two, I found it quite amusing.

I used to do this kind of stuff with signal lights and semaphore when I was in the Navy. BCNU (Be seeing you)  is particularly amusing when sent as semaphore, especially when "around" is added by flinging one's arms around your body to the bewilderment of a confused and puzzled sailor trying to make sense out or it. The more I thought about it, the funnier it became.

My highlight of the first day of this new year, was trying to work K3Y/KL7. (He was actually KL8DX in Alaska).  It's the first time I've heard this state and he was a little over 3,000 miles from me. But no matter how hard I tried, I couldn't make the catch. However, the pursuit was just as fun. I listened and tried to work him for half an hour. Hihi

I did however, work another Washington State station. K3Y/7 was actually NG7Z and member # 802T. I seem to have a pipeline into Washington for some reason.

I'm looking forward to many more.
Posted by Jspiker at 7:19 PM

Hi John and Happy New Year. Some nice contacts there. I have a number of straight keys. A few years ago I threw caution to the wind and bought a Begali Camel-back key. This was before he tied the price to the Euro rate of exchange. I think the best SK I have ever used. When I return, I will be more active in CW/QRP events. 73 Dick

Darn, sorry I missed you! I have some good propagation to the East Coast and I always try to take a pause for QRP stations! There is hope if you heard me though!! Happy New Year.

Hello Dick...I still have my Iambic paddles but rarely use them. The straight key has become my favorite.
Since starting to use my entire arm with the key, it's become effortless.

Hello Phil...I'll check the SKCC K3Y page and watch for your next time slot. You were coming in very well here in WV (559). It would be great to work you since I don't yet have Alaska.

BTW/ Have some really good "Moose" pictures that I took while in Denali. Always kept a large tree between me, the moose and her two calves. Nothing worse than an angry moose.....got'a lot of respect for those big guys. Hihi

We had a great day flying at 12,000 ft between the peaks. Really at the right place at the right time. Three days of good weather! Would love to come back soon.

John, Great stats. I've enjoyed your blog and looking forward to more. That is a great looking old straight key. I'm sure the SK would be proud that it's still making music on the air.

I've been using my NT9K Pro pump as pictured on the K3Y qsl card at the top of your post for about three months now. I have to say I am fully satisfied with this key but I think Dick is right too, I see a fine Italian key in my future sooner or later.

I tried for K3Y/7 in Washington today on 20m but he could not hear me at all even with 50 watts. Oh well, we have a whole month!

Fifty watts...My next shot at Alaska will be with my max 10 watts and an indoor 18" antenna. But I'd really like to work him.

I'm sure I could pull it off with my Zepp stretched high in the trees at the local city park... but it's cold and windy up there. I thought of you when I viewed the Pro pump on the QSL card.

BTW/ thanks for the tip on the European arm method. The difference is like night and day.

Hi Dick...read the excellent reviews on the Camelback key. Impressive!