I feel fortunate that the Kanawha Valley is nearly 350 miles inland from the Eastern Coast. This morning as I watch the news channel, I see the winds and water surge in the Outer Banks of North Carolina and Virginia Beach. The hurricane is expected to directly hit New York City.

We have friends and relatives (a lot in the New York area) who are facing a disaster unlike any other in the last three decades. Never, has the transportation system been closed in New York City. They expect major flooding in the low areas of the city.

We actually felt the tremors of an earthquake a few days ago here in the valley. Personally, I wasn't aware of anything, but walking out of the local shopping mall, there were hundreds of people in the street, who as a precaution, were forced outside until buildings could be checked for damage.

Not much happening here on the radio the last week. I've heard DX but my focus is back on the 40 meter band. My pleasure is from working a "good fist", not a long distance contact.

Recently, I worked this "lighthouse" station. (VE3RAM/LT) Unfortunately, they're right in the path of the upcoming hurricane. 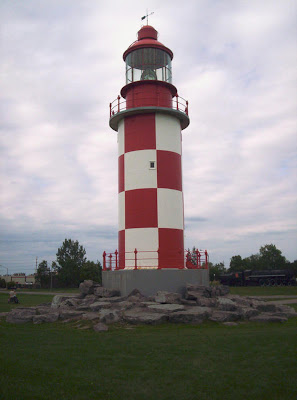 Lets hope this is it for some time or at least until winter.
Best Regards - Jim

I hope so and good luck.