A New HT and a New Outlook on Repeaters 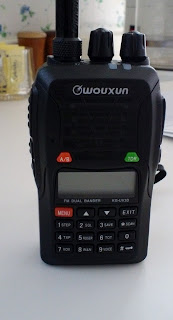 The recent purchase of a new "handi-talkie" has brought back some good memories to me. I've been doing something I rarely do; I actually listen to the local repeater. Like most two meter repeaters, ours has sparse activity on it, and my enthusiasm for this segment of the band has waned to the point of almost non existence during the last several years. I think in the past, I've viewed two meters as the natural "first step" up the ladder towards the HF band, and once there, a place never to return. Looking at it now, perhaps that's been a mistake...

I've been hearing "new" hams on the repeater and it's reminded me of my first contacts; and those who were instrumental in inspiring me to "move up the ladder". After almost 20 years, I find myself in "their" position to inspire new people to learn Morse Code, since it's no longer required as the "basic building block" for advancement to "non repeater" usage.

Several of the "new" guys are hanging around the 10 meter band where they eagerly await SSB openings into the Caribbean and Eastern Europe. Most are using 50+ watts of power. They "listen to me" when I talk about making the same contacts, with the same stations, while using 10 watts of power....or less.

I recently made good 10 meter contacts into France and also made contact with a VERY strong CW station near Mexico City. I was using 5 watts of power. I'm sure I could have worked this guy with a watt, should I have attempted to do so. I've worked San Juan (on twenty meters) with a watt and received an excellent signal report.

I'm looking forward to more "chats" on the two meter repeater now. I see it as an opportunity to motivate others to learn and use CW. My perspective is changing to that of an "Elmer" and a few evenings ago, I sent a little CW to a fellow across town.

That early memory of my "first" contact into Palmer Lake Colorado returned to me.

I hope to lead others down the CW road where "simple" gear will open their eyes to the joy of operating QRP in the field. I'm glad I bought the new HT. I hope that I can use it to inspire a few people to use CW as their primary mode of communication.

Nice piece of equipment John. Are you thinking of using it at your bike trips as well? 73, Bas

Unfortunately, when riding around town, I don't like to carry it and risk dropping it on the road. But when walking or hiking, after removing the antenna, I'll usually put it in my day pack.

I will, however, use it when I travel to NYC. There's quite a bit of activity on both 2 meters and 440. As awlays, I'll keep a "pocket" J-pole along. It really increases the range!