Bears and Other Woodland Radio Creatures 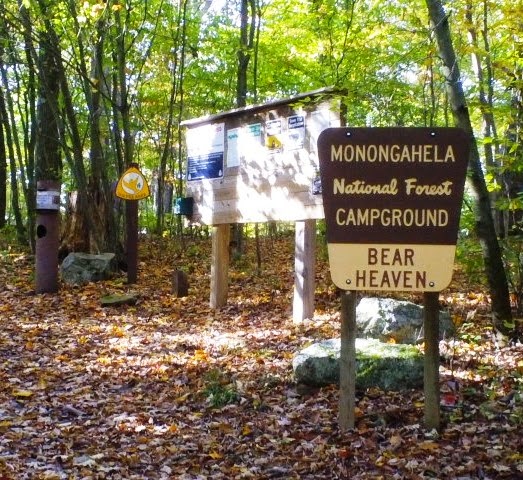 In addition to our monthly breakfast meetings with the local NAQCC WV Chapter group, Steve (KC4URI) and myself (N8ZYA) continue our radio camping trips to isolated places in West Virginia. On the first day of October, we both made a three hour drive (from different directions) and met at the Bear Heaven Campground near Elkins WV. We set up camp near the Bickle Knob Fire Tower which is just above an elevation of 4,000 feet on an isolated ridge high in the Monongahela National Forest. 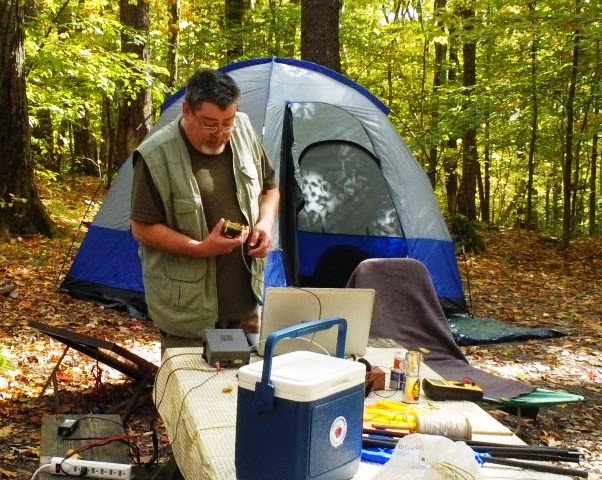 We used Steve's Elecraft K-1 CW radio for our time at this campsite. Despite a shady location, Steve's solar panel worked well to keep the marine battery charged. I was able to place the dipole antenna at least 40 feet in the trees; it could barely be seen from the campsite.

It took little time to work NAQCC Club Member KB8FE on 30 meters. Keith lives near Lake Erie in Ohio. I don't know if he was using this key but I find it very unusual. He calls it his "letter opener key". I like resourcefulness and creativity. This key certainty fits the bill. 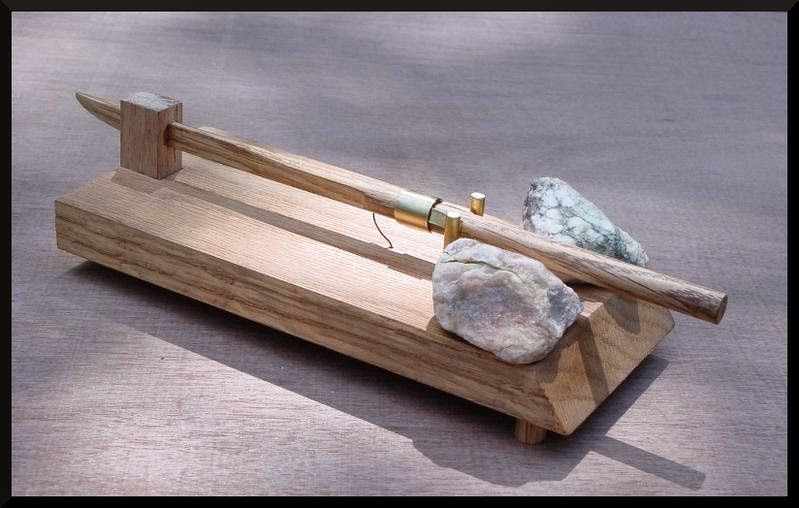 Soon afterwards I worked K2XN in Rock Hill, South Carolina on 40 meters. I then worked WA8KOQ in Tennessee and it was time to put the finishing touches on the campsite and think of dinner. Steve worked KC4NN in Weaverville, North Carolina as the sky started to darken and the temperature began to drop at this 4,000 foot elevation campsite. 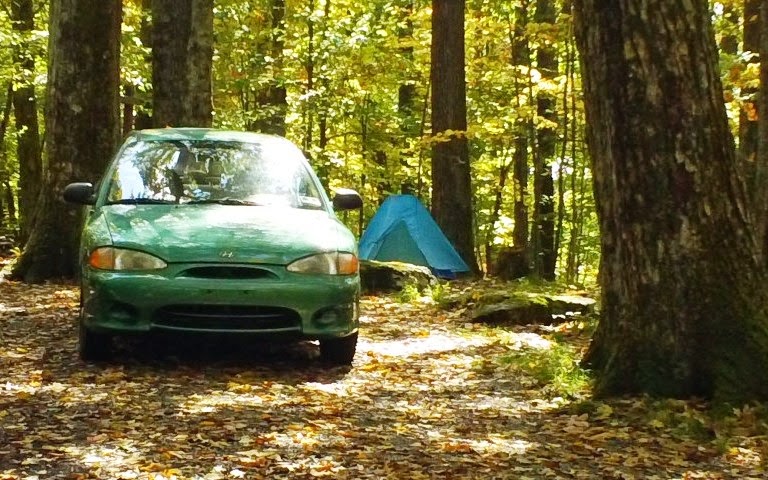 I'm amazed at Steve's cooking skills. We had great food on the last radio camping trip and this trip was no exception. As he arranged the menu items on the picnic table, he made a great cup of "campfire coffee". Boiling water with freshly ground coffee beans thrown directly into the kettle, simmered for exactly four minutes, and strained with a "french press" is something not expected in the wilderness. I'm a coffee addict and this process makes a GREAT cup of coffee. 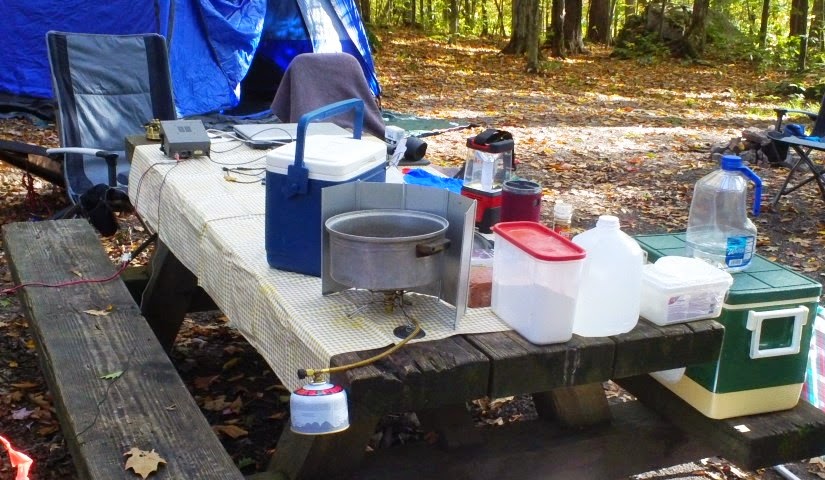 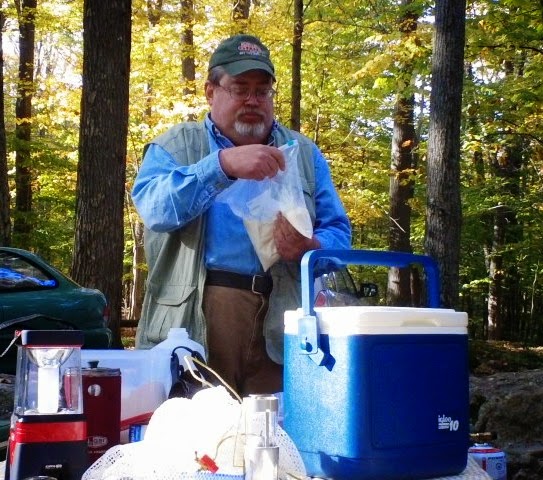 A few minutes later, I was amazed to see Steve creating a dinner of "biscuits and stew". He did this by mixing the properly measured (top secret) ingredients of "Steves Biscuit Mix" directly in the large zip lock bag. The stew was added easily in the same process and it turned out perfectly. 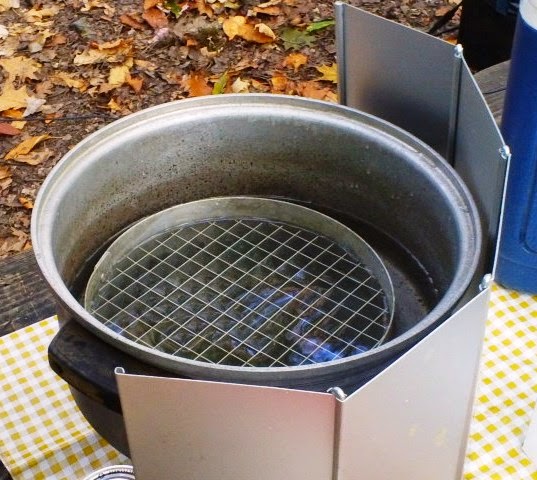 This little item is the key to everything. It works like this: 1. Place mixed (top secret) ingredients in plastic bag. 2. Carefully place zip lock bag on the circular inner ring, 3. Add water to just below the inner ring. 4. Place lid on large container 5. When the steam starts to rattle the lid, continue for 10-12 minutes. This thing makes great cobblers and pies too!

I haven't seen one of these used since my youthful days of working with the Boy Scouts. 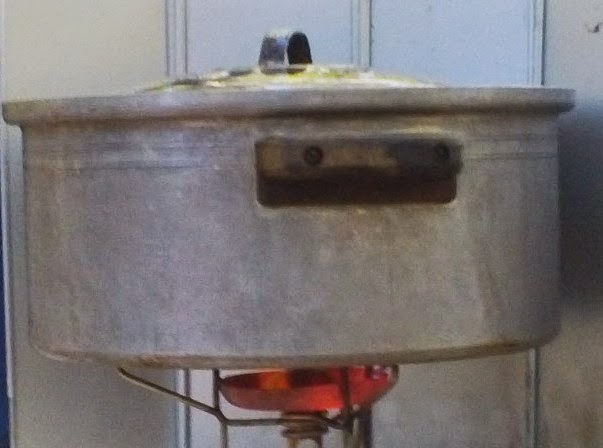 As the skies continued to darken and the temperature continued to drop, I noticed this creature sitting in the distance. Steve called it the "Cookie Monster Big Foot". While at this campsite (appropriately called "bear heaven" for good reasons) I never expected to see this unusual sight. I heard it utter the phrase "peaches are good".

This creature must have kept all "bears" at a safe distance because we never saw any of the those "big black fury puppy dogs" on this trip. Don't get me wrong; bears should be taken seriously, but it's rare to have problems with them in the back country. Our philosophy was "leave them alone, and they will leave us alone". It's worked every time for me, and both of us have seen plenty of black bears over the years. They're normally docile creatures that forage on roots and berries. 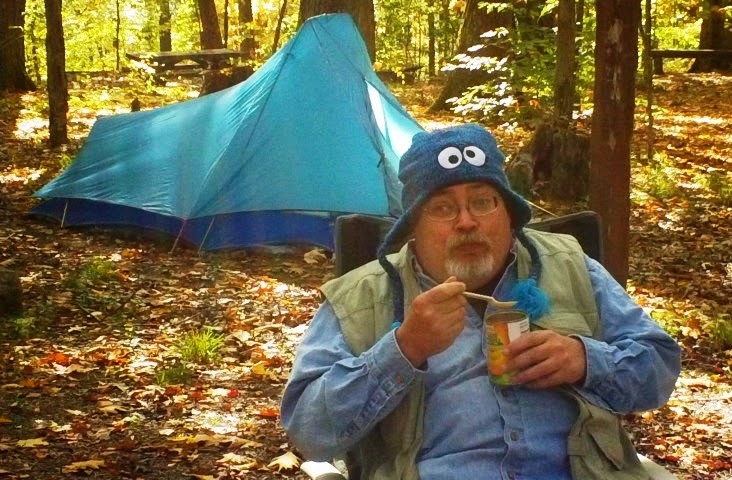 As darkness fell, I started a nice fire with my favorite "wood stove". This little contraption creates a roaring fire with only small twigs and sticks. It can burn anything from wood, charcoal briquettes, or alcohol, and does it quite well. I really like it because it eliminates the need for liquid fuel. The "Firebox Stove" is a quality stove designed uniquely for simplicity and portability. 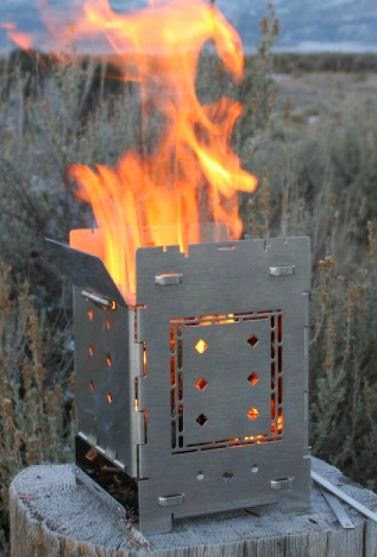 I next worked N2ANL in Newburgh New York. When traveling back and forth to NYC, I've often landed there, at an old Air Force base, rented a car, and drove into the big city. Garry was QRP, by the way, at around 450 miles distance.

As the sounds of the night forest became more prominent, and chipmunks scurried through the leaves, we both expected frosty conditions that night. But the temperature never dropped below freezing. The sky was cloudless and the moon shown brightly through the tall trees. I left a small candle lantern on the table which burnt most of the night.

The next morning, I was able to work a NAQCC QRPp station (K3PXC) in Manchester Pennsylvania running less than a watt into a G5RV antenna. Both Steve and I had nice conversations about camping near the fire tower with him.

I feel more comfortable about outdoor radio camping all the time now. Believe it or not, I'm seriously considering downsizing my tent. The next camping trip might be with nothing but a bivy sack and a tarp. The modern fabrics and insulation materials of today make camping with the barest of necessities very comfortable. I'm looking forward to the next trip! 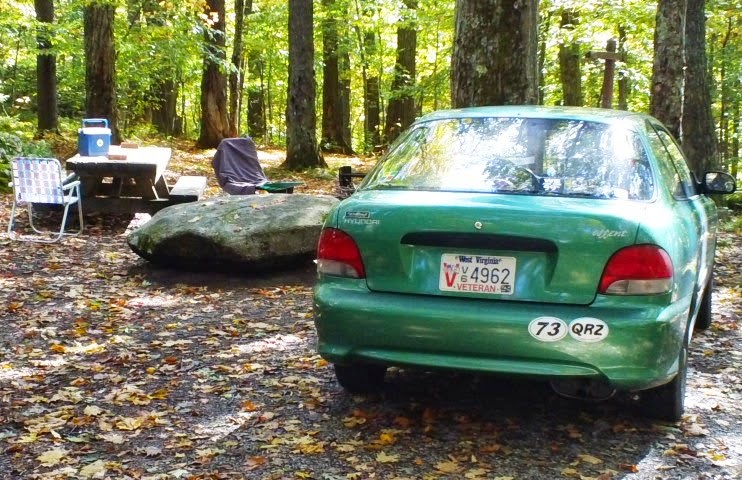