From West Virginia to Washington in 2 Minutes 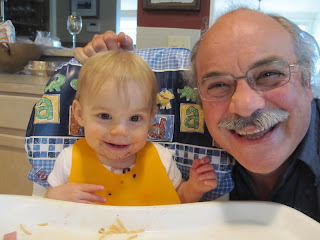 Here's one for the books....This morning, just before breakfast, I turned on the radio and listened to the 40 meter band. I heard a very weak West Virginia station (W3NP) operating as K3Y/8. We managed to exchange RST, QTH, Name and SKCC #'s and then he just vanished into thin air. I don't work many West Virginia stations because short distances are naturally difficult on any band. Nothing very unusual.

The exciting part of this story is the next station I heard down one MHz on my 40 meter band.

Paul (NG7Z) was just starting to send CQ de K3Y/7 from his Washington state QTH (again) and I was in the right spot at the right time. That's his picture at the top of the page.

The unexpected part was hearing and working him on 40 meters!
I've worked a few coast to coast stations on 40 meters and have even worked France once. But it's unusual to say the least. (especially QRP with an indoor antenna)

The weather was nice and sunny yesterday and I braved the cold air when I took off on the bike. Today the high is supposed to be near 46 degrees. My choice between sitting inside and playing radio or getting outdoors on the bike is a difficult one. Unfortunately for radio....I'm needing the exercise, fresh air, and the feel of wind in my face. But if I return home for a brief break, I'll have the rig tuned up and ready to go.

Alaska is due on the air again this evening. I'd sure like to work him and the bands seem favorable.
Posted by Jspiker at 8:03 AM

Very nice going, John. It is the little quirks that make amateur radio, especially at QRP levels, so interesting. I find your enthusiasm contageous.

Looks like a happy baby with grandpa in that photo. Warms my heart just looking at it. 73 Dick

Yes...it does. A picture says a thousand words sometimes. That's a proud grandpa there!

I had a great ride today. Returned about 3pm and totally worn out. But it's a good kind of tired and I'm the better for it.

Still listening on the 20 meter freq...when you least expect it. Hihi

I raise the 20M antenna again tomorrow. I sure would like to make it a 2x. 73 Dick

I'll be listening at 11am local time again. Hope to hear you!