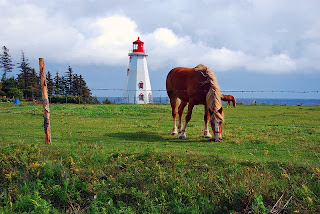 I've been thinking a lot lately about the thrill of unusual contacts on the radio. Yesterday I worked a new Island. This was only my second contact in this part of the country.
Prince Edward Island is sort of "out there by itself" and when I heard this new call sign (VY2) I didn't recognize it as a Canadian station. Every Canadian station I've ever worked has had the VE prefix. (and this is about number 30 for me).
I seem to have a "pipeline" into the northeast and get unusual signal reports at distances around a thousand miles in that direction. I can actually draw a "line" into this part of the northeast with the 599 and 579 reports. This afternoon my RST was 579 with my 5 watts of power. (QSB and QRN was really terrible on the Canadian side but my RST at the beginning was still 579)
It's a real thrill to me when I work station like this one because I don't think there's a lot of hams on this island.
When I think back on my best contacts over the last several years, I think of a camper set up on a picnic table somewhere near the Appalachian Trail, an operator transmitting from an old submarine, a ship on the Great Lakes, an airplane (those are really rare), a lighthouse, or dozens of stations celebrating and promoting "special events".
Other times it's just an operator with an extremely good "fist" and his spacing, his abbreviations, his choice of words in the QSO, or the subject matter. Despite all the DX out there now as the bands are picking up, it's still a thrill for me when I work something unusual.
This afternoon, Prince Edward Island fell into one of those categories.
(picture courtesy of Wikipedia)
Posted by Jspiker at 1:34 PM

Every summer, I usually manage to work Geoff W1OH from PEI, while he is up there on vacation. He takes along a QRP rig and if the NAQCC sprint happens the week he is up there, he always enters.

Looks like a nice place for a summer vacation!

Hi Larry....don't think there's many hams up there so a contact is a really good thing. Yes...the VY threw me off as well as the PEI.

Hello Dick...yes, I enjoy working ships also. On a similar note, a Canadian Maritime group used to have a 40 meter SSB net. They were right in the middle of the 40 meter CW band. (don't know it they're doing it now) .

The net operator called for any station, any mode....It's the only time I've ever done anything like that. I was in New York and checked into it using a little MFJ CW rig.

It's sad, but I recently dropped my membership in a SSB club because they couldn't hear me down in Florida with SSB....I'm sure CW would have worked well.

None of the control operators were willing to listen for a CW op. It's a loss for both of us....

Hope you return home soon. I should be able to work you in NY.

I don't operate 40M cw at home because of antenna space limitations. But I have monitored the QRP and SKCC calling frequencies. I have heard Canadian SSB stations early/mid mornings. Their regs permit SSB operation, I believe.

When I return we might try a mid morning sked on 30M. Might work out before band goes too long.

Nice rare contact. Well done. Must belike me working Andorra or Malta I guess? The Russian QRP Club and Julian suggested I too would have had more luck in the Russian contest had I used CW. Perhaps I too will have to do what Kevin is doing and get learning! Must be great fun once it is mastered. 73 Adam

Hello John, a nice catch really. VY2 call was also unknown with me. It's funny all those new calls that show up. 73 Paul

The Liberals neglected the military but they were never seen as a joke by Canadians - just liberals. They got cozy with the notion the US would bale us out of any trouble.For more Prince edward island