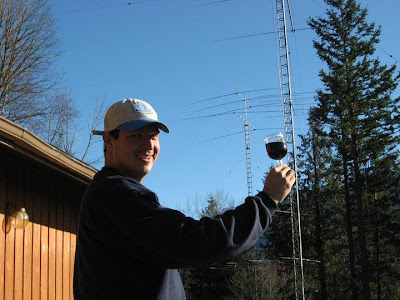 My 100th QRP DX Contact!
A toast of fine red Chilean wine for the occasion!
It was quite by accident that I happened to tune into the 20 meter SSB band so late in the evening.  (01:15z) But last night, I worked FIVE new DX stations!
I was totally unaware of the "IARU HF World Championships" contest. I don't participate in many of these because I'm limited to 10 watts and don't have "filters" installed in my radio. I also don't pick up the microphone very often. This was like shooting fish in a barrel but a fish, is a fish, is a fish, when it comes to DX Stations right now. I've been terrified at the latest "dismal propagation forecasts" about the solar cycle.
CE4CT was my first contact in South America and my farthest southern station last night. I was amazed at his signal strength from a distance over 5,000 miles. It took several tries but I eventually worked him.
This is a milestone for me.
The vast majority of my DXCC efforts started to materialize just this year. These five new DX stations now leave my total at 104.  While I would have preferred CW contacts, I felt like NOW was the time to act.
I'll post about the other four contacts later. One in Brazil, one in the Cayman Islands, one in the Canary Islands, and the other in Bosnia-Herzegovina.
Last night was a VERY good night!
Posted by Jspiker at 8:15 AM

Hello John,
Congrats on the first 100 DX contacts.
Your indoor Isotron is doing great.
It's not always easy, but as you show us, perseverance pays off.
I very much like contests for making interesting QSO's with low power. No metter how many or how few sunspots, nothing can beat the enormous activity of a "world wide" contest.
The lower the sunspots, the greater the achievement.
Well done!!!!!
Good luck for the next (100 hi)DX contacts.
73, Bert

Good afternoon and congrats on the contacts! I tried at times to stay away from or not put to much weight on the propagation reports. I find that by listening to the reports I would not even attempt to go fishing....and look what you would had missed if you were like me and just read the report and gone and read a book instead. Great work with 10 watts!