Getting Back Into the Routine 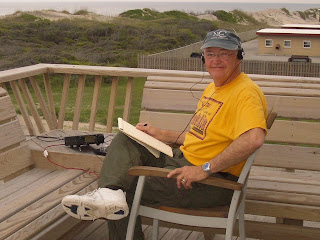 Slowly but surely, I'm making a few contacts again on the bands. Things still aren't back to "normal" but I'm getting there.... (After a long trip, there seems to be a million things to do to get the household back in order).

I had a "refreshing" QSO with a fellow FISTS member (WA8BIJ) this morning. Vince lives in Mount Clemens, Michigan. It's a short distance from me, as the crow flies (about 300 miles) and we both had a good copy on each other. Vince was looking at my "Bio" on QRZ and made a comment about the "view of the ocean" from the Outer Banks of North Carolina. The picture I have on "QRZ.COM" was taken as I worked stations, with a G5RV antenna, from the balcony of a rental unit. I always take the QRP rig with me on our annual "beach trip" with relatives.

We agreed to exchange QSL cards, via the FISTS Buro, and also, at the last minute, exchanged "area codes" for the 100 Contacts FISTS award.

The "refreshing" part of the QSO was the "order" that we exchanged our QTH's. I had just attempted a contact with a station in Richmond, Virginia, a few minutes beforehand, and the station "vanished" into thin air. (It happens sometimes) The most recent event (on my side) was the result of a squirrel "shorting out a transformer" in the neighborhood. They sure make a big "bang" when they touch the wire and the transformer at the same time.

I assumed Vince had heard the exchange so I sent a quick name, and my state. He did the same, and later in the QSO, we exchanged our cities. The QSO then went directly to the Bio info and the Buro. It was fun and refreshing....we never mentioned rig, antenna or weather.

It's really rare to work a station so close to me (100 miles). Bob lives in Buckhannon, WV. That's VERY near the site of the "Sago Mine Disaster". The only surviving miner in that group was Randal McCloy (KC8VKZ). I've never worked him, on the local repeater, but often think of the tragedy and the enormous strength and will power it took to overcome the death of his fellow workers.
Posted by Jspiker at 10:11 AM