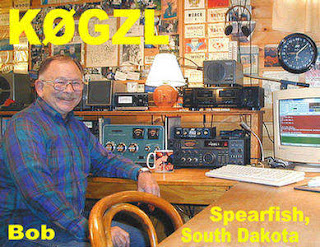 Since I began this hobby, I've found that most Hams have a natural curiosity about History and Geography. I think it has to do, as much with the "magic" of skipping a signal across the sky, as it does with the "curiosity", of where the signal lands on earth. (I know when I make a contact with another operator, it definately makes me want to do a little reading about towns with strange names).

Last night, when I worked K0GZL in Spearfish, South Dakota, the unusual name of this town caused me to do a little history and geography reading about this place.

Geographically speaking, Spearfish is located only a few miles from the center of the United States. It's very close to the crossroads of South Dakota, Wyoming, and Montana. My QRP signal bounced 1,226.5 miles and Bob (K0GZL) heard me at the 559 level. On forty meters, I really rejoice at contacts of more than a thousand miles. Yahoo!

In the earlier years, there was a "hint of gold" in this area that brought "thousands" of hopeful miners to this place. Once the gold rush started, the city was founded (1876) at the mouth of Spearfish Canyon. The name "Spearfish" was the result of Indians declaring this spot a "good place to spear fish".

I see similarities between this town and my own here in West Virginia. Coal mining is often called both a "blessing and a curse" by many living here. The early "gold mining", in the Spearfish area, was done with a process using "mercury" to remove the gold from the ore.

Coal is often called "black gold" in West Virginia. The process of "mountain top mining" is equally devastating.
Posted by Jspiker at 1:02 PM