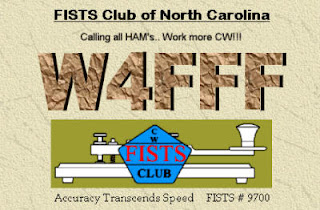 Yesterday was a busy day for me and it was nearly 10 PM (est) before I could tune the rig into the FISTS Summer Sprint freqs. I still wasn't able to devote "serious time" to this contest, but felt I should hand out a few "West Virginia" contacts for the event. (I've recently became aware of how important an extra state or two can be to the log books).

This isn't a QRP event, so the competition is with the 'big guys'. They need "very good ears" to hear a 5 watt signal in the midst of the pack.

I worked two stations that I've worked before, in the mid west, on different circumstances. My hat's off to N5DY (Jack in Oklahoma) and also K0LUM (Russ in Nebraska). In all, I worked five stations (this isn't going to be a prize winner) but still, for me, lot's of fun.

My biggest "catch" was working a "Fists Club Station". At three minutes till the final bell, I worked W4FFF in North Carolina. This is my second "fists club station". The last two weeks, I've made a special effort to check into the "slow CW net" of the NAQCC club. It's club call is N3AQC.

As an added benefit, I was able to collect two new "CC" numbers. This contest was a good way to add more "FISTS" contacts to the log book!