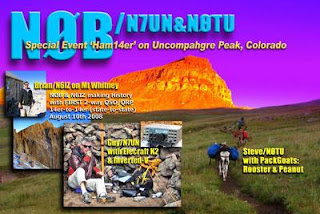 I was pleasantly surprised to work a "portable QRP station" on 20 meters today. Guy (N7UN/P) is a fine example of why I love QRP operations. He was operating in the field (I assume) and since he was using a #7 call, I thought he was probably a western station near Oregon, Washington, or Alaska. (You can't do that these days).

The signal was pretty weak. Not because of the distance, but because we were too close to each other. I don't work a lot of stations, on 20 meters, less than 500 miles away and he was in West New Jersey. I actually had to ask for his name twice because of QSB.
I've been trying to work a Colorado Station (WG0AT) for several years but can't find myself at the right place and the right time when he's hiking in the mountains with his two "goat" companions.
After looking up Guys web site: http://n7un.blogspot.com, it became obvious that Guy has done some hiking with him and the goats.
Guy (N7UN/P) is quite the hiker and takes his radio along on DX'peditions, mountain vista's, and on long distance hiking trails. (the Appalachian Trail being one of many). He uses a "Buddipole" for his antenna or a dipole many times.
You should take some time (assuming you're interested in QRP operations) to view his web site. It's a classic example of why QRP ops love to spend a day outdoors with a radio. It's often been said that "A Picture is Worth a Thousand Words"...you can't get a view like this operating the 'big' stuff.
I've placed a link to his site on the right hand side of this page.
On August 9th of this year, he will be on one of the 14,000 ft mountain peaks of Colorado.
Info is on his web site....

I've worked Steve twice, in fact I received a QSL from him today. I was using my usual FT-817 and Buddistick from my home QTH. He was using an IC-703 ten-watter and Buddistick. Nice guy and anyone who appreciates goats is ok in my book. I could watch his U-tube films for hours.

He's been in my sights for several years now....perhaps Aug 9th from one of those 14,000 Ft Colorado mountain peaks?

One of my best QRP pedestrian contacts has been W0RM using an old CIA radio. I bet there aren't more than a hundred of them in operation now. I've worked him twice from Colorado.

Sometimes it's just a matter of being in the right place at the right time....which makes them all the more enjoyable!