Tired of AM Radio--Here's an Alternative 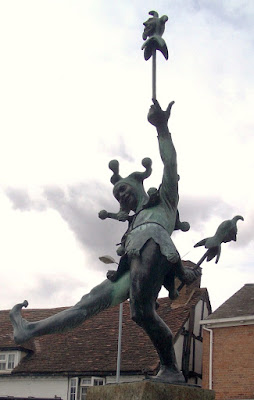 I've recently ranted about the "drivel" on AM radio on this blog. There are many ham operators that are also AM radio broadcasters, but broadcasting and ham radio, are two totally different things. On a small scale, I'm considering becoming another addition to these ranks.
The drivel being transmitted on the local stations here is just nauseating. It's not factual, it's misleading (I'm being kind with these words) and it's become a cesspool that's sucking the life out of this state. In other words, AM radio has become an exclusive "propaganda machine" for one political party. It's not a democratic voice; it's terrible for our country. Our only alternative now is "satellite radio" but not everyone has this service or can afford it.
Several years ago, there were a couple of hams that operated a "community radio station" in a nearby town with a 10 watt transmitter. They played 50's and 60's music and I loved this station. I'd drive out of my way, to get within range of the transmitters "10 mile target area". But they didn't last long and they never re-applied for their license after it expired.
Looking at comments and information on the web, I've been alarmed that even a small AM stations "start up costs" could reach $100, 000. I'm retired--- never made "that" kind of money, and I'm not looking to create a corporation to borrow money and begin a questionable new business. I don't want another full time job. And the permitting process (even for a simple 10 watt community radio station) can take many, many months, if it's granted at all, by the FCC.
There's an answer to this problem now. It's called "part 15" low power hobby broadcasting and it doesn't cost much to put it on the air. I first became aware of it through an article in a recent radio magazine. Being perfectly legal, it gives the operator a 'fingerprint' of about a square mile.
I can reach several thousand people with that signal.
I'm looking at this very closely. I realize it's a very limited target area. I would only operate in the morning and evening hours. I'd use "local" musicians instead of "mass marketed musicians". I think there's a big market for this in this valley. In addition, using multiple transmitters, it's possible to cover the entire valley of more than 50,000 people. I have a local college and several hundred politicians in this immediate area too.
We have quite a variety of music here. There's Folk, Celtic, Cajun, Americana, Soft Rock, Gospel, and Symphonic music. We're blessed with an abundance of music and local people are always looking for an avenue to display their wares .
On the politics side....mountaintop mining is a big issue here. I'm not against all mining, just the mining that blows off the tops of mountains and shoves them into the hollows and pollutes our streams. It's important to have the proper people standing up for us in Congress and I'll address that issue with this station. And at the national level, I'll air an alternative voice to those that will listen. I'll be democratic in my ideology and offer some fresh air in this valley. Something that's not happening now....
My time line is around the first of the new year. I'll keep you posted on the progress.
Posted by Jspiker at 8:22 AM

Sure do agree with you about the state of AM radio. I haven't listened to it for years. Most of FM too.

There is an on-line system called "Live 365". I believe one can become an internet broadcaster with a minimum of equipment and a subscription to this internet service.

Check them out on their Live 365 site.

It's on our local FM band now. It's being simulcast from the exact same AM streams. Our biggest problem in this valley is that it's all owned and operated by the same man. (corporation)

Oh...by the way, yes, he's running for the Senate seat of Robert C Byrd in the upcoming election. Can you imagine what the "public" is going to hear about his opponent? (or how much "air time" the opposing candidate is going to get on these stations)I haven't heard a word and don't expect to.

A little one sided isn't it? As I said earlier, this has become a "propaganda machine" of the highest order.

I'd loose my mind if it weren't for National Public Radio and internet streaming.

Thanks for the info on "live 365". I'll look into it, but I'd prefer to address this problem on an equal playing field. It's not happening now.

John - I just typed a lengthy reply and proceeded to somehow lose it. For all the advantages of computers and the internet, this wouldn't have happened with pen and paper!

As you know, I am in complete agreement with you about the state of the AM broadcast band. Most of these talk stations are far more interested in ratings than in having any kind of integrity. What was our government thinking when they left most radio broadcasting in this country to the forces of the free (and now deregulated) market?

I love the idea of your station playing local music and representing alternate opinions to what will be aired on the commercial outlets. I'll be following your blog, so be sure to keep us updated on your progress. Hope to see you on Bill's Hobby Broadcaster site.

By the way - I've got you on the blogroll on my site - thanks for the mention on yours!

Hello Dave...the excellent post on your site was my inspiration. That's a quality set up you have there! (everyone should take a look at it on your blog)

My station will not be as impressive but will serve the same function. I'm developing a list of local musicians now for broadcasting. (got to have those all mportant blessings from the musicians that will be featured on the air)

This will be "fun" for me and NOT a business. If nothing else, I'll listen to myself and my favorite music while biking or walking around our community. All kidding aside tho...I have a feeling there will be a LOT of people listening to my programing.

I may be physically in my 60's , but my mind is much younger. I'm also a published author so know how to promote myself. I'm also a decent musician and know good music when I hear it.