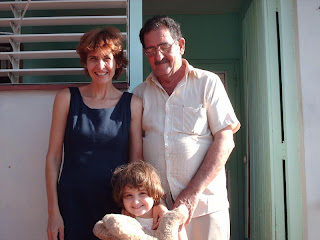 I've worked several stations in Cuba recently, so when I heard CO2KK calling, on the 20 meter QRP frequency, it easily captured my attention. He was very weak, but since I worked a Puerto Rico station a few days ago, with a watt, I decided to give it a try.

I immediately recognized Arnie (CO2KK) as the person I've heard on the "Radio Habana Cuba" shortwave broadcast. When I was a kid in high school, I used to listened to his broadcasts on a Knight Kit "regenerative receiver" of which I used a long piece of telephone wire for an antenna.

I thought he heard me, and was attempting a return contact, but another station (AG8K) who was near the gulf coast was in a better position. I was drooling as I listened to him work the other station.

After the brief contact, he sent CQ again and I tried to work him several more times . No matter how hard I tried, I couldn't do it..... even with my maximum 10 watts.

A little later, I sent Arnie a brief e-mail. He returned it this morning. He could tell I was there and even copied N8Z.....It was a very nice e-mail.

To hear his program " Dxers Unlimited " click on the link for information.
Posted by Jspiker at 6:59 PM

I have just seen your blog posting !
It was very nice to read it, and also to see the photo of ¨exotic¨ antennas that are connected to your transceiver.
They seem to be very compact and indoors...so I wonder if you were using those antennas on 20 meters when picking up the QSO between AG8K and CO2KK.Have you tried ¨magnetic loop antennas¨ ?
How about making a schedule on 14060 ?
73 and DX
YOur friend in Havana
Arnie Coro
CO2KK Host of Dxers Unlimited radio hobby program

Dear amigo John;
I am trying again to leave a comment for your blog entry about CO2KK.
It was a very nice posting !
Let us try to make a two way QSO on 20 meters, on or near 14.060 kHz ..
Just drop me an e.mail to inforhc at enet dot cu, for your best times. My best times available are around 22 to 23 hours UTC
73 and DX
YOur friend in Havana
Arnie Coro CO2KK
Host of Dxers Unlimited

Yes...these are my antennas that I use everyday. I live in a "restricted antenna" area and must keep them indoors. I'll be looking forward to a contact with you when band conditions are right. I'll e-mail you for a schedule....

Thanks for responding to my e-mail. I'll be listening for your shortwave broadcast this week. I've always enjoyed your program!

The antenna that I use on 20 meters is only 18 inches long.