I miss working those DX stations. The band just hasn't been there the last few days. But 20 meters still continues to amaze me with the stations I hear and am able to work. My "standard" contacts are now back to those in Washington State, Texas, and Nova Scotia. It seems about a thousand miles per bounce.
I worked KE7PZX in Chelan Washington yesterday evening. He's almost exactly 2,000 miles from me. I've worked him a total of six times since last November. I continue to work VE1BA in Kingston Nova Scotia quite often. John is also a QRP operator that uses three watts from his location which is about a thousand miles from me. I've worked him five times now.
My biggest operating change now is the habit of reducing my power to the absolute minimum. This afternoon I worked W9OAW who was in Ashland Wisconsin. Gabe is only 738 miles from me, but since I was hearing him 599+, I responded with one watt.
Before the end of the QSO, I reduced my power all the way (the radio won't go any lower) to one half a watt. He could still hear me but suggested I return to my mighty one watt. I upped the power to 5 watts and he said I was about to burn the house down with my signal.
If I had originated the QSO with one half a watt instead of one watt, that would have been another 1000 mpw award. I really like the response that I get when I notify the other station that I'm using one watt of power. 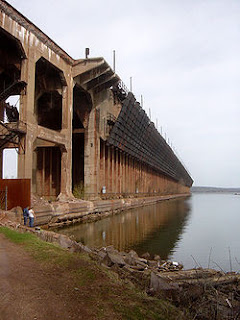 The above picture is of an old loading dock used for Iron Ore in Ashland Wisconsin. It was last used in 1965.
It's cut and pasted from the Wikipedia site with permission of the owner.
Posted by Jspiker at 2:43 PM

The choice of the power at the start of the QSO, remains difficult after you discovered "more than 1000 MPW.
In Europe it is easy to estimate the distance to an other state, while ervery state it's own set of prefixes.

I made a list of DXCC coutries with the shortest distance from my QTH, to that state.

I used the: Find your QTH locator by F6FVY Laurent Haas.
And the fantastic "Miles per Watt calculator" by N9SSA.
Just Google with: PA1B QRPp to go to the site.

Don't get dissapointed by any station with 100W or more.
The frequency must be absolutely clear. hi