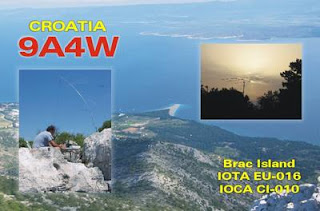 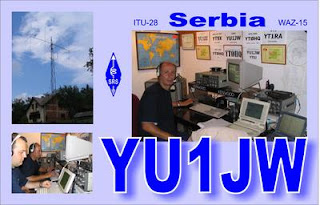 The band was hot again this morning. I was listening for France or The Netherlands,  but didn't hear one station. I was, however, able to work two stations in Croatia 9A1A and 9A4W. Both were monster stations with great signals here in West Virginia. 9A4A was actually on the Isle of Brac. I always like to work islands. The 9A1A station has one of the most elaborate beam antenna's I've ever seen on the web. It's no wonder he had a +20 signal.

Other stations I was able to work were YU1JW in Serbia, LY2BAW in Lithuania and OE8SKQ in Austria.
I heard, but couldn't work, several stations in Italy. Another in Puerto Rico, and a very strong F5/TU5KG in Africa.

All my contacts this morning were near 5,000 miles. Again, all were SSB contacts. The end fed wire seems to be doing a great job for me. The weather is cold today and the ground soggy and muddy. I'd love to get the wire outdoors, but for now, I'm satisfied with it stretched indoors, between the bathroom and the bedroom.
Posted by Jspiker at 8:55 AM

Fantastic for an in door antenna just goes to show you no matter where your antenna is you can get out.

How true....Although I would love to get outside with this antenna (and out of the valley), the weather is getting bad now.