As expected, I found 10 meters very crowded this morning. All the big guns were out, and it made for a frustrating attempt at a few contacts.
I worked two stations with CW this morning. One in Germany (DL6WT), and another in the Czech Republic (OK2PDT). Morse code was the solution to the problem as it was nearly impossible to compete with all the heavy SSB stations running high power and massive gain antennas.
I also think I've about worked my limit, as far as DX is concerned on the HF bands. Of course, there's always the rare station which is in the right place at the right time, but mostly I'm limited to around 5,000 miles using indoor antennas here in the valley. I would however, like to work more stations in Southern hemisphere and I've still not worked Alaska and Hawaii. (which would easily give me my WAS award)
I find myself loosing interest in the "59" SSB contacts,  with a brief exchanges of call signs,....and nothing more. It's just not my cup of tea.
Ten meters has been an interesting band for experimenting, and it's so simple to set up and operate with QRP power. ( 17 ft is very short piece of wire)
There's different things for different people, but for me, long conversations with a good operator are still my prize catches. Yesterday afternoon, I worked NK1V in Winsted, CT who was running a mighty 4 watts into an OHR kit with an OFC dipole. At only 500 miles, I enjoyed this 2 X QRP contact immensely. 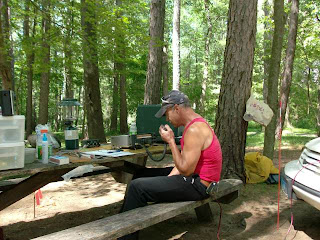 I've always thought of radio as a "portable mode" with low power. Distance isn't necessarily the goal for me. I like to keep it simple, and thankfully, there are thousands of other operators out there thinking the same thoughts.
Posted by Jspiker at 8:56 AM

I'm patiently waiting for 10 meters to open here this morning. Hopefully we can QSO sometime as I would enjoy getting you in the logbook here, too! I'm only half way to my DXCC on 10 so a nice European opening would be great!

I've heard you on 20 meters but couldn't work you. If you want to try 10 meters, when is the best time for you?

Locally, I find the best window between 10 am and noon (EST)

Hi John, you are absolutely right. Every word is true. I don't like contesting either. Sometimes I gave a few points, that's all. In the weekends the bands are too crowded for me. I like to be QRV at week days. I cherish every QSO. 73 Paul

Yes...I'm about done with DX contesting. My most satisfying contacts are those with other QRP operators. I've worked 139 DX stations now, but the vast majority were 30 second "hello and goodbye" contacts.

My biggest kick comes with working the "simple" stations which are using "simple" antennas. Money and infrastructure isn't necessary for me to enjoy a fun hobby. (IMO)

BTW/ Congratulations on your latest QRPp contact. That is a VERY good contact! Fantastic.... absolutely fantastic. It doesn't get any better than that one.

John - hearing you come back to my CQ on 15 this morning was a great surprise. I had an inverted vee with the apex at 47 feet, but was really wishing that it was 20 feet higher and more in the clear, or that I had a beam to swing your way. Just a few more dB would have turned the QSO into a solid Q5 in each direction. Nevertheless, it was a thrill to work you the first time!

Not sure if you're still thinking about doing Part 15, but I thought this story would interest you. I advertised my SSTRAN for sale on a Part 15 forum some months ago and didn't receive any offers. However, I just had an offer to buy it from a guy in the UK who works for the BBC. Maybe they're trying to improve their coverage a little!

Hope we get to QSO again soon.

73, Merry Christmas and Happy New Year to you and your family,

Yes...I knew your call sign immediately and it was a real joy to hear you!

I had a dipole stretched between the bedroom window and the bathroom window. Crude...but it works better than I thought it would.

Hope to work you again. That was a nice 2x2 QRP "coast to coast" contact.