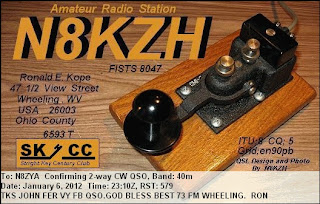 I had a really nice chat yesterday evening with a "local" ham on 40 meters. I say "local" because it's rare for me to work another station this close to me. Ron (N8KZH) is located in Wheeling West Virginia, which is in the extreme northern panhandle of our state. In a straight line, it's less than a hundred fifty miles from me.

The QSO this evening made me think of several things.

First and foremost, it's a real pleasure to work a station with an "excellent" fist. Ron was using an old "German Military Key". I wish I had "special award"  for those with the ability to send flawless CW, (especially with a straight key)  but the best I can do is highlight a really good operator when I hear one.

Ron was working me with 50 watts and using a simple dipole antenna, which was pointed away from me. (right off the end).

Also, Wheeling WV is the home of AM radio station  WWVA  (1170 on the radio dial) which I once listened to in my younger years. There's a lot of history about this station. It was started in 1926, with a home built 50 watt transmitter, which operated from the basement of a home. It had a "citizens band radio" in the studio which allowed "truckers" to communicate with the station. Taking this into the future, it was a pioneer of the "coast to coast" AM trucking radio network. 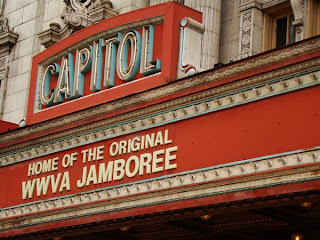 In 1941 it progressed into a 50,000 watt station which could be heard over most of the United States. It's specialty was "country music" which was broadcast from " Capitol Music Hall " , which at the time, was the largest civic center in West Virginia. In August of 2010, the stations towers were destroyed by a  severe wind storm. It's operating now with temporary equipment at reduced power.

Sad to say (in my opinion) the station is now owned (1997) and operated  by "Clear Channel Communications" and has become, like most other AM radio station in the United States, a mouth piece for conservative radio broadcasters like Rush Limbaugh. I'm not part of the wealthy 1% of the American population they reflect with their programming. I DO NOT listen to it, and in extreme cases, will boycott business that advertise on their stations.

Similar to Clear Channel Communications, in my home city of Charleston, the AM radio market is virtually "monopolized" by the same owner, who, by the way, was nearly elected "governor" in the last WV election. He actually lives in Florida............

Although I can't hear the station WWVA now, I've found a great alternative to "canned broadcasting". I recently bought a " WiFi Radio " which I enjoy very much.

I often "google" the home towns of hams that I work on the air. (especially those with excellent operating skills). Yesterdays contact brought back memories from days past gone. I wish it weren't so.......
Posted by Jspiker at 8:37 AM

I know a few in Russia with those big ears. Hihi Yes, I think they both should receive well deserved praise too. I'm just amazed when some distant station hears a low power station. It's amazing...

btw/ Hope you get the other half of the antenna back in service soon. Last year, we had a 70 MPH wind here in the valley. We lost a big tree in the front yard.