The Netherlands on 12 Meters 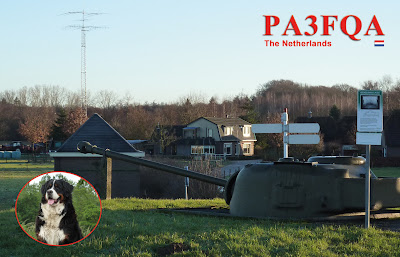 This station gives an entirely near meaning to the term "Big Gun" station. I worked PA3FQA this morning on a new band. Soon afterwards I worked PA4VHF in the same country. Both these stations were on the 12 meter band and the first I've made here. I always think of fellow blogger PC4T when I work stations in the Netherlands. Being a bicyclist, I can't think of a better place in the world to ride. Both these station were 599 into West Virginia!

The rest of the afternoon was spent hiking in the forest again. It was a really beautiful day here with temperatures in the low 80's. After returning, and just before dinner, I worked OK1AWZ in the Czech Republic. Milan was on the 30 meter band. A little later, I was able to work ZF2AH in the Cayman Islands.

I heard a station in Iceland this morning but couldn't work him. I need that country for the DXCC logbook. Perhaps another day?
Posted by Jspiker at 4:24 PM

Good morning John, very nice work on 12m and the temps down your way sound great!! I have heard Iceland in there as well. I was able to make contact with them during a contest this year. I find that contests are a great time to pile up the DXCC's. There is lots of countries on at one time and they are all listening for calls.
Mike

I'll be listening too...hope to work you!

I need that country and it's well within reach of me now.